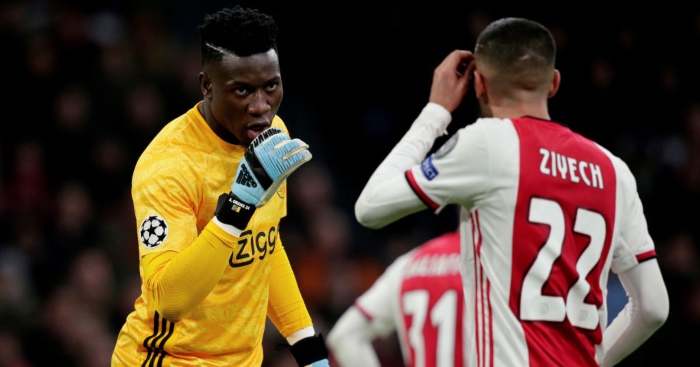 Chelsea have reportedly won the race for Ajax goalkeeper Andre Onana, who has been linked with a £34million summer move away from the Dutch giants.

Voetbal Nieuws claims the Cameroon international has chosen a move to Stamford Bridge, despite also being a target for the likes of Barcelona, PSG and Tottenham.

Chelsea are on the hunt for a new stopper after Frank Lampard axed first choice Kepa Arrizabalaga after a poor run of form.

Willy Caballero was preferred over Kepa in the recent 2-2 draw with Leicester City, but at 38 is not considered a long-term option in west London.

OPINION: The ‘worst’ Premier League XI of the season so far

Onana, 23, has been outstanding since breaking into the Ajax side and currently has two years remaining on his contract with the Dutch giants.

Chelsea have a strong tradition of fielding outstanding goalkeepers in the recent Premier League era, with the likes of Petr Cech and Thibaut Courtois thriving at Stamford Bridge.

But Kepa has struggled since his record £71.6m move to the Blues and it would now appear that Chelsea are ready to cut their losses and bring in Onana for less than half that fee.