The Spain international signed a five-year contract in August after joining City for an initial fee of £20.9m. 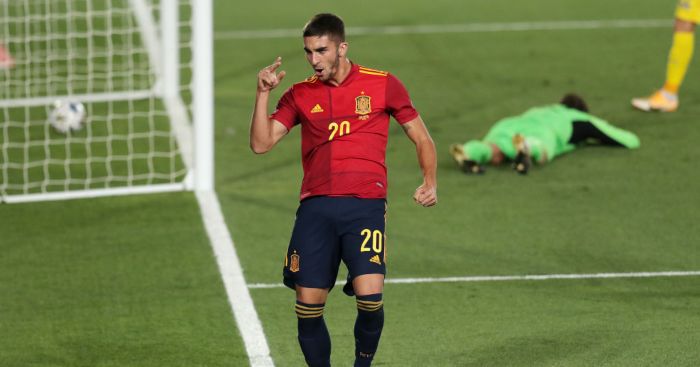 Ferran Torres featured on a list of Jadon Sancho alternatives at Man Utd before eventually completing his move to Man City in August, according to reports.

Pep Guardiola’s summer restructuring began this summer with the 20-year-old Valencia winger his first signing, having already sold Leroy Sane to Bayern Munich and lost David Silva at the expiration of his contract.

Torres, who in November became Valencia’s youngest player to make 50 LaLiga appearances, was a long-time target for City, while Man Utd were also credited with interest.

FEATURE: Five keeper rotations for Man Utd and Chelsea to learn from…

The Spain international signed a five-year contract after joining City for an initial fee of £20.9m and said at the time that it was a “dream” for Guardiola to be overseeing his development.

However, a report in Spanish publication AS (via Sport Witness) claims that Torres was viewed as one of United’s alternatives for Borussia Dortmund winger Sancho in case they can’t get a deal over the line.

Man Utd began talks to try and sign Torres with their recruitment team realising it would be difficult to get a deal for Sancho over the line this summer, with Dortmund’s asking price proving to be an issue.

At the time, Torres had a year left on his deal at Spanish side Valencia and the Red Devils saw the Spaniard as a much cheaper option than Sancho.

Torres eventually snubbed Man Utd to sign for City with the ‘rejection’ leading Ole Gunnar Solskjaer’s men to look at other targets such as Gareth Bale.