Home All The News Report: Messi in talks with Neymar over Madrid rumours 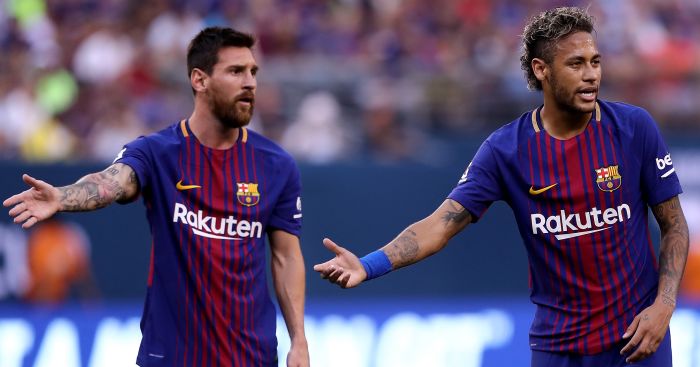 Lionel Messi has been in contact with Paris Saint-Germain forward Neymar in an attempt to stop him joining Real Madrid, according to reports.

Recent speculation has suggested that the Brazilian is unhappy at the Ligue 1 club due to Unai Emery’s playing style and a feud with Edinson Cavani.

However, Neymar dismissed any possibility of moving to Real Madrid from PSG on Friday – but reports in Spain suggest that he could return to La Liga further into the future.

Don Balon claims that Messi has been in touch with his former team-mate in case the rumours are true in an attempt to stop him from moving to the Bernabeu.

It is understood that the pair remain close, despite Neymar’s controversial move to France, and that Messi contacted him via WhatsApp as he is worried that Neymar could return to Spain to play for their arch-rivals.

And the report continues by claiming that Neymar is understood to have not ruled out a future move but isn’t in any hurry to leave the Ligue 1 outfit.

In an emotional press conference on Friday, Neymar said: “I want to ask you to stop creating stories which are not true.

“I want to say what I think. I’m totally realistic and what I don’t like is these false stories about me, there is nothing bothering me at my club.

“I’m here because I asked to be here. It’s going really well (in Paris), I’m really happy here and motivated. I’m a player who wants to give everything on the pitch.

“What bothers me is everyone creating stories about me, with my coach and with Cavani. These things are not real, it’s not true.

“I just want to be happy, I’m not here to make or create trouble with anybody. I know my role on my pitch and I do what my coach asks me to do.

“I had a chat with (team coordinator) Edu and Tite because these things are hurting me, every day there are these stories.”