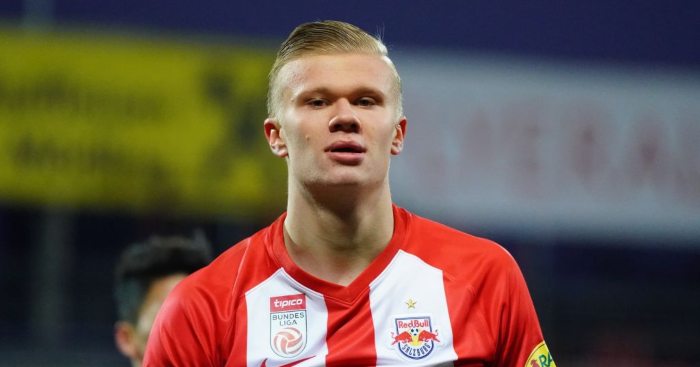 Manchester United will be boosted by the news that Erling Braut Haaland could be available for just €20m in January, according to reports.

The Red Bull Salzburg striker is one of the brightest prospects in Europe, having scored eight Champions League goals and 15 Austrian Bundesliga goals so far this season.

Both United and Liverpool are reportedly interested in securing the services of Haaland, as well as other top clubs from around Europe, but there were suggestions that they could be put off by their €100m asking price.

And Bild, who cover the story from a Borussia Dortmund perspective (via Sport Witness), claims that Haaland could in fact be available for €20m and not the €100m mentioned elsewhere.

Rumours in Germany last month had suggested that there could be a release clause in Haaland’s contract that would allow him to leave for €30m (suggesting that only Red Bull Leipzig could trigger it) – but now Bild claim there is a clause that would mean he could leave for €20m in January.

The report says the clause is ‘favourable’ to Dortmund but don’t make clear whether it would be applicable to all clubs.

Bild says ‘According to BILD information, the Norwegian can leave Salzburg in January for around 20 million euros,’ which, as Sport Witness point out, sounds like the clause is open to offers from any club.

That will be music to the ears of the Man Utd transfer bosses, who are understood to be looking at bringing in a striker over the January transfer window.