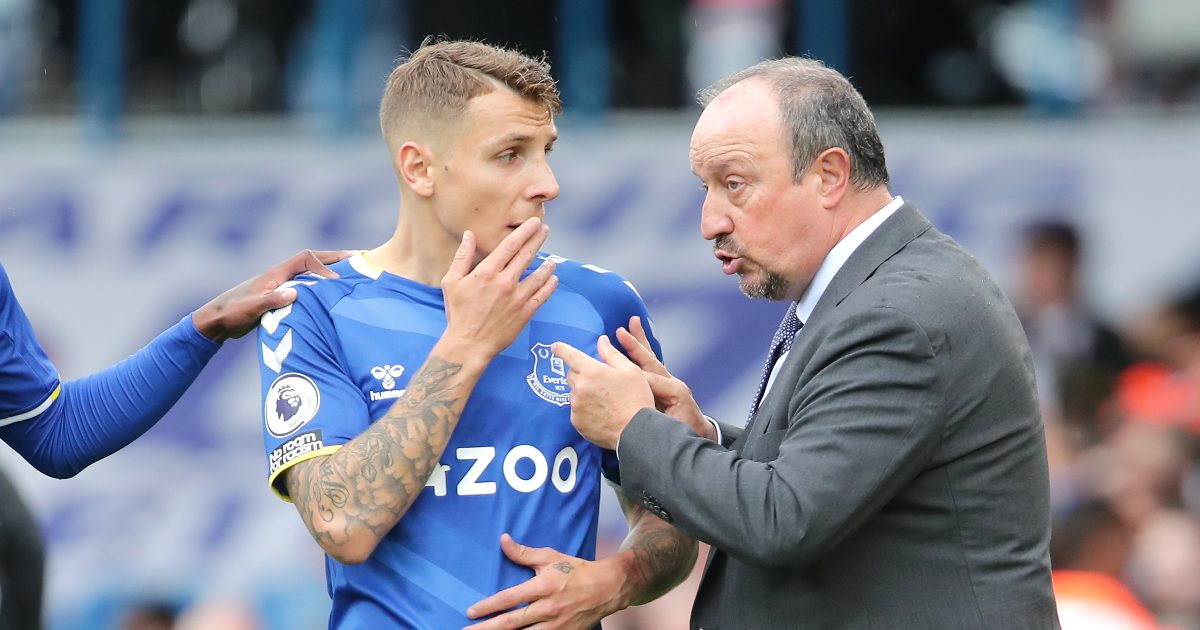 Everton full-back Lucas Digne has a “fractious” relationship with Rafael Benitez and they had a “disagreement” before Monday’s game versus Arsenal, according to reports.

The Frenchman has been a standout player for the Toffees since his move to the Premier League from Barcelona in 2018.

Before the 2021/22 season, Digne was a key creator of goals for Everton. He grabbed 19 assists from his 112 outings across all competitions.

His only assist this term has come in the Carabao Cup. Before Monday night’s game against Arsenal, Digne had played in all but one of Everton’s Premier League games this term.

But the defender was left out of the squad as the Toffees beat Mikel Arteta’s side 2-1. Speaking on his absence, Benitez said that Digne was “unavailable”:

“As a manager, you have to make decisions and you have to do your team selection,” Benitez responded.

“I decided that Ben Godfrey could be a good option for us for this game. He did really well so I am really pleased with that. That’s it. The main thing is to be sure the team is performing and we have the right mentality.”

The Athletic are reporting that Digne was not left out as a result of an injury. Instead, they state that “he was omitted after his already fractious relationship with Benitez took another turn for the worse.”

They add that Digne and Benitez had a “disagreement in Spanish” before the win over Arsenal. This led to him being taken out of the matchday squad.

Elsewhere, Jamie Carragher has suggested that Everton are a “joke right now”:

“If I go back to the David Moyes era, Everton had something about them. Yes they didn’t win a trophy, but there was a spirit about them, a fight, it was a tough place to go. They stood for something,” Carragher said.

“Not long afterwards Moshiri came in, and because we couldn’t break that ceiling, because we didn’t have the money under David Moyes, to go that step further… Moshiri comes in and look how many managers he’s had in that time.

“If you count interims he’s had eight managers. He’s on his third director of football. The money spent is mind boggling and they’re getting worse.

“Under Moshiri they’ve signed 58 players. That’s why I talk about this club being a joke and a mess right now.

“At this moment on the board they’ve got Bill Kenwright and Denise Barrett-Baxendale, staunch Everton supporters who love the club.

“Then you’ve got the money guys in Moshiri and Alisher Usmanov in the background.

“There’s no way Bill Kenwright and Denise Barrett-Baxendale wanted Rafa anywhere near that club. But the problem we have is that because they’re not in control they’re terrified of going against Moshiri in any way, because he’s the guy with the money.

“He’s the one with who is going to produce that stadium. Without him there probably is no stadium.

“Decisions made by Moshiri are really poor. He hasn’t got a clue what he’s doing. Yes he’s got the money, but he’s got no football expertise at all.”