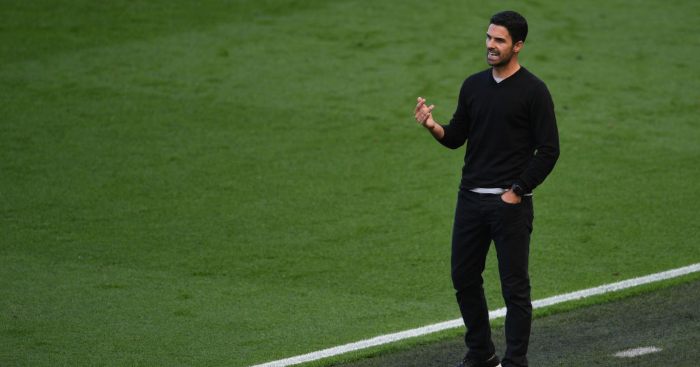 Arsenal’s preparations for their clash against Manchester City were dramatically hindered as three players had to miss three days of training over a positive coronavirus test, according to reports.

The Gunners have had a nightmare return to playing Premier League football with two losses in their opening two fixtures against Manchester City and Brighton.

Their poor form means they sit in tenth, six points off fifth place and 11 points adrift of fourth-placed Chelsea – who occupy the final Champions League position.

And now David Ornstein in The Athletic claims that ‘an extraordinary situation behind the scenes’ disrupted Mikel Arteta’s preparations for Arsenal’s trip to City in their first game back after the season was halted.

Ahead of the fixture with Pep Guardiola’s men ‘three squad members ended up missing three days of training’ after ‘Arsenal received untimely news that one of their players had tested positive for coronavirus’.

They were given the news at the ‘end of the preceding week’ with the player told to self-isolate for seven days as expected by the Government guidelines.

The report adds that two players had spent enough time with their team-mate socially to be classed as a ‘close contact’ and they too had to self-isolate.

The Athletic claims that ‘Arsenal strongly suspected this was likely to be a “false positive”’ with none of the three players displaying any symptoms.

Arsenal ‘took private samples’ from the player who had tested positive ‘to double-check whether or not the player had the virus (the antigen test) or had contracted it in the past (the antibody test) and both came back negative’.

The report continued: ‘Government rules allow people to stop self-isolating earlier than seven days if they get a negative antigen test result but as this was an in-house process it could not be approved by the Premier League.

‘The three players, therefore, took part in the next round of official testing last Monday and each received good news 24 hours later. The league was satisfied and, thanks to a green light from the government, the trio were cleared to rejoin training in time for a 5pm session on Tuesday.’