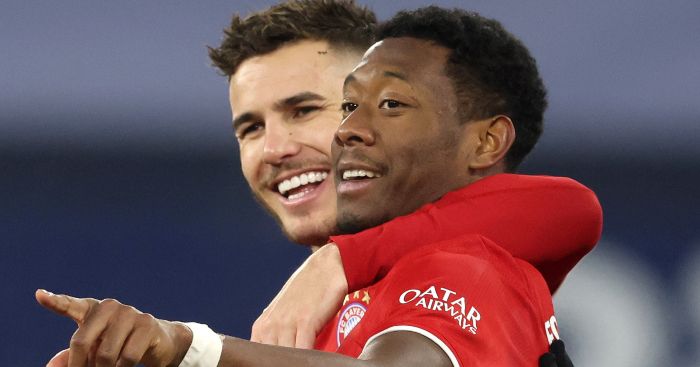 Liverpool are still firmly in the hunt to sign Bayern Munich defender David Alaba in the summer transfer window, according to reports.

The 28-year-old has spent his entire professional career with the German giants, where he made his senior debut during the 2009/10 campaign when he was only 17 years old.

Since then, he has become a huge player for Bayern, making over 400 appearances and winning nine Bundesliga titles, six German Cups and two Champions Leagues.

OPINION: Klopp, Lampard and the myth of patience

Alaba is out of contract at the end of this season with the Austria international is committed to leaving Bayern in the summer.

Five days ago, Sport Bild journalist Christian Falk rejected reports that Alaba had turned down Liverpool, explaining that they were still in the race.

Falk said: “It’s a classic case of not true. We had reported about their (Liverpool’s) interest and that they have also thrown a salary offer into the ring which has not yet been rejected.

“There is still no trend towards England and we hear in the club his preference is to go to Madrid, who may already be ahead of the competition and have the deal fixed or signed.

“There is a great consensus that in the end he will move there.”

And now Spanish newspaper AS (via Sport Witness) claims that Liverpool are trying to sign Alaba ‘at the request of Klopp’.

The Reds don’t ‘lower their insistence’ on Alaba despite reports they had a contract offer rejected but that finances over a deal are still the ‘main problem’.

Alaba asked for a €13m net annual salary from Bayern to renew and that is believed to be what he is asking from potential suitors too.

This could rumble on for a while with AS adding that a decision may not be made until between April and May.