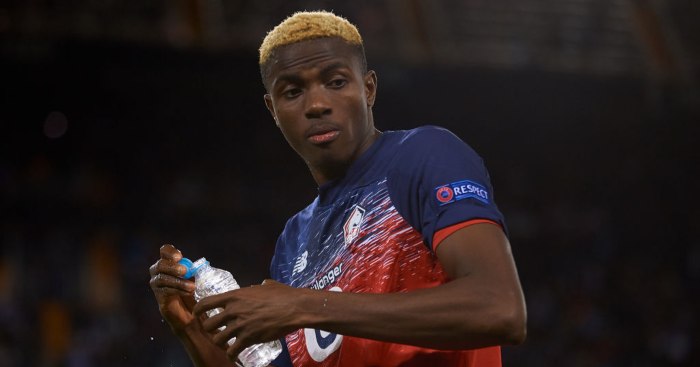 Manchester United are set to make a summer move for Lille striker Victor Osimhen, according to reports in France.

Liverpool, Chelsea and Tottenham have all been linked with a move for the Nigeria international in recent months due to his goalscoring exploits this season.

Osimhen has bagged 18 goals in all competitions this campaign, including 13 in Ligue 1, and providing four assists to team-mates.

Back in December, Lille president Gerard Lopez confirmed that “there is already interest for sums of about this level” – that being €70m.

And now Le10Sport claims that Man Utd have made Osimhen a ‘priority’ signing during the next transfer window with Ole Gunnar Solskjaer looking to bring a striker to Old Trafford.

The report adds that Osimhen possesses ‘all the qualities’ to succeed in the Premier League but Man Utd could face competition for his signature from Spanish giants Real Madrid.

Odion Ighalo, who was brought in on a temporary deal until the end of the season, has done well since he joined Man Utd but the club is likely to pursue a long-term option in attack.

Speaking back at the beginning of March, Solskjaer didn’t rule out a permanent deal for the former Watford man, he told Sky Sports:

“It doesn’t hurt [living the dream] but he’s here on merit, he’s here because he is a goalscorer and a different type of striker for us.

“We might get to the summer and think we want to extend this, who knows?

“He’s come in as a breath of fresh air as well. He had chances in his five minutes against Chelsea, he scored against Bruges, he had chances against Watford, he had a very good save [from a shot] against Everton – there have been good saves, he doesn’t miss the target very often.

“Even for Anthony (Martial), Mason (Greenwood) and Marcus (Rashford) to learn that it is where the sharks are swimming. It’s comfortable outside the box and you can have a few shots. It’s in there where it might be a bit tougher and you might get hurt – that’s where you get goals.”