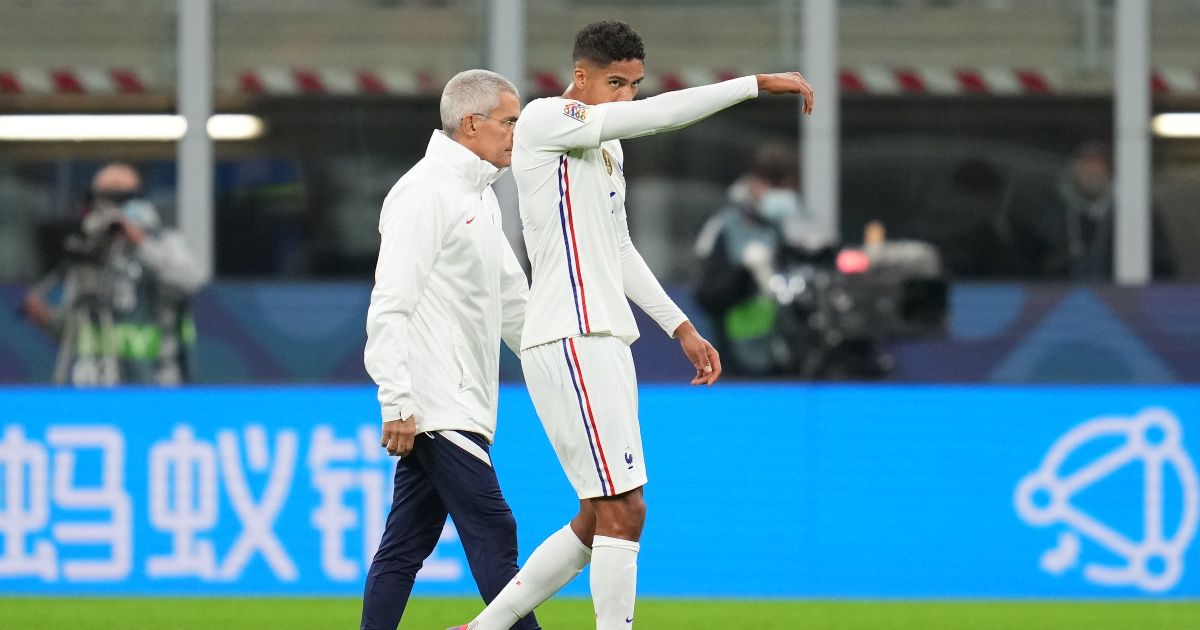 A report has revealed good news for Man Utd fans and Ole Gunnar Solskjaer with Raphael Varane not likely to be out for long.

Kylian Mbappe scored the winner as France came from behind to beat Spain 2-1 and win the Nations League on Sunday.

Les Bleus lost defender Varane to injury just before half-time, in a blow to his club side Man Utd with Dayot Upamecano took his place.

However, a report is now claiming that the injury to Varane is not as bad as feared with the former Real Madrid man likely to be out for one match.

French newspaper L’Equipe (via Sport Witness) has revealed that it is a right adductor injury and will undergo more testing when he returns to Man Utd.

The ‘first clinical examinations’ brought good news for Red Devils fans though with Solskjaer only likely to be without Varane for a ‘few days’.

It is understood that he will be ‘unlikely to be able to play’ against Leicester City at the weekend with captain Harry Maguire also set to miss that match.

Meanwhile, former United striker Danny Webber thinks Marcus Rashford will be “revitalised” when he returns from an operation on his troublesome shoulder injury.

“Hopefully when he comes back he’ll be refreshed and he’ll be ready to go, because he’s played a lot of football over the last couple of years, Marcus,” Webber told the club’s official website.

“He’ll be fresh, he’ll be revitalised and ready to go again.”

“You look at the subs that came on the other day [against Everton] and that was minus Marcus. Martial started the game, but you’ve got Ronaldo, Cavani. Jesse’s playing out of his skin as well.

“I think it’s an embarrassment of riches but we’ve got to get it right, get into the rhythm and start blowing teams away.”

On the match against Leicester, Webber continued: “They pass the ball, they’ve always got the threat of Vardy in attack. It doesn’t matter who he’s playing against, he’s always up for it and he stretches the game, he makes it difficult.

“They’ve got good players, a decent side and Brendan Rodgers is a decent manager. So it is difficult but I think for us we’ve got to go out and do what we do.

“Make sure we impose ourselves on the game. We talked about the attacking players we have and we’ve got to go out and make sure we put them to the sword especially if we have one or two players out at the back. Attack is the best form of defence.”