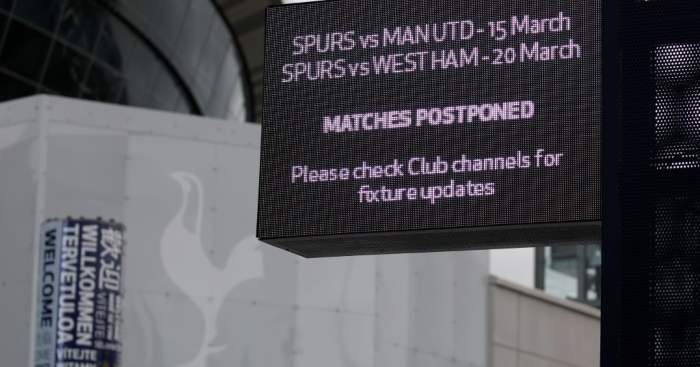 The Premier League intend to finish the season after club chiefs came up with a ‘radical plan,’ according to reports.

The English game, like most of Europe, has suspended all football until April 3 at the earliest due to the coronavirus outbreak, which has, at the time of writing, killed 71 people so far in the UK.

UEFA announced yesterday that the governing body, the European Club Association, European Leagues and players’ union FIFPRO Europe have signed a joint resolution committing to completing all domestic and European club competitions by June 30, “should the situation improve and resuming playing be appropriate and prudent enough”.

To help with scheduling, domestic league matches might be played in mid-week and UEFA competition matches on weekends.

And The Sun now claims that some Premier League clubs have come up with a ‘masterplan’ to play the remaining 92 fixtures ‘behind closed doors with every game in neutral venues at a separate time, live on TV.’

The report adds: ‘The proposal offered by a section of Prem clubs would see two or three grounds host the games, most likely in the Midlands.’

The ‘revolutionary proposal’ will be put forward to the Premier League at a meeting on Thursday, with the potential for teams to play every three days and stadiums hosting more than one match a day.