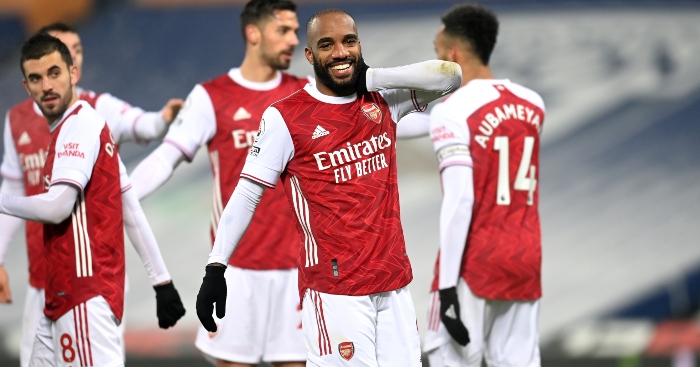 Resurgent Arsenal continued to resurrect their season after thumping West Brom 4-0 to pile more misery on the Baggies.

They caught the Gunners on one of their best nights of the season, though, with Arteta’s side breathing life into a campaign which was going off the rails just a few games ago.

Arsenal only climbed to 11th but they are at least within striking distance of the top six, sitting three points behind Chelsea having played a game more.

Baggies boss Allardyce had said the Gunners were in the relegation battle with them before Arsenal beat Chelsea and Brighton over the festive period.

Albion came into the game after Tuesday’s 5-0 hammering by Leeds and, on Saturday’s evidence, there is only one team heading for the drop.

No team with eight points or fewer from their opening 17 games has avoided relegation from the Premier League and Albion were outclassed.

Hector Bellerin and Saka tested Sam Johnstone inside the opening 10 minutes to set the tone for a dominant first half.

But Arsenal grabbed the lead and total control after 23 minutes when Tierney proved why, when fit, he is such an asset.

Ohhh! Kieran Tierney! That is special! 😍

A terrific solo goal from the Arsenal man 👏

The full-back twice beat Darnell Furlong to embarrass the defender on the left and cut inside before firing high past Johnstone from 15 yards.

Five minutes later it was 2-0 when the Gunners tore their hosts to ribbons with an incisive move.

Emile Smith Rowe swapped passes with Saka and Lacazette before being slipped through by the Frenchman to cross for Saka, who had continued his run unmarked, to tap in.

Just like Leeds, the Gunners threatened to run riot at the Hawthorns and Johnstone needed to turn Lacazette’s cross over after it hit Grady Diangana.

Albion were, again, out of their depth and Johnstone denied Lacazette two minutes before the break after the striker outmuscled Branislav Ivanovic.

The hosts needed a response and Callum Robinson fired in after Pereira hit the post after the restart only for the offside flag to halt their celebrations.

But Arsenal wrapped up the points with two more quickfire goals from Lacazette.

Saka again caused chaos for the first when his 61st-minute cross was turned onto his own post by Semi Ajayi, who then blocked Smith Rowe’s follow-up strike, but Lacazette gobbled up the rebound.

The second, after 64 minutes, was equally as simple as the striker converted Tierney’s cross from close range.

Johnstone stopped Aubameyang adding a fifth late on and saved from Willian before Leno denied Rekeem Harper a stoppage-time consolation.