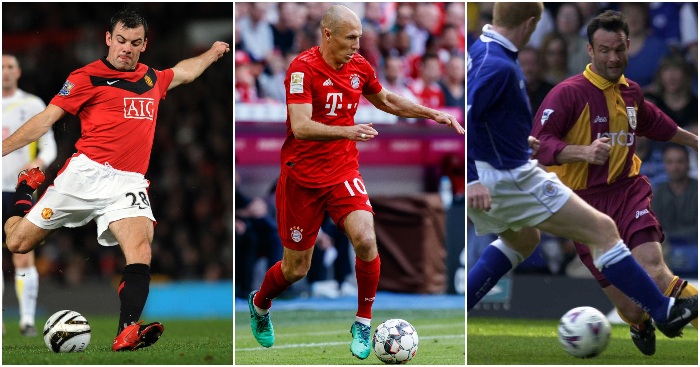 Arjen Robben
“Show him outside… OUTSIDE… f*ck’s sake… stop the shot… NO SHOT… NO F*CKING SHOT!…”

The backing track for so many of Robben’s 188 career goals was translated by goalkeepers into Dutch, Spanish and German across his five-club, four-league, 19-year career which came to an end this week. It wasn’t the only tool in the winger’s box but when one is so effective, why bother reaching for the others?

The wonder of Robben is a tale in three parts. First, the fake. A simple drop of the shoulder which still fools left-backs into thinking that this of all days will be the one when Robben finally opts to go outside. Then comes the dribble – a run from right to left which can last for anything between two touches and three days. By now, stage three is inevitable. But when the curling shot into the far post comes nobody knows. Keepers set, re-set and re-set again with each touch Robben takes in-field but it’s all a waste of time and energy.

Arjen Robben has confirmed he will leave Bayern Munich at the end of the season, after 10 trophy-laden seasons with the German giants 🙌

Wherever he goes, we're sure he'll be cutting inside and scoring before long 👊 pic.twitter.com/32CK2HBy82

Even when there’s no keeper, Robben still insists on cutting inside…

Antonio Valencia
Valencia is Robben in reverse. Barely ever in a decade at Manchester United did he cut inside off the right touchline. And when he did, without fail, he’d trap the ball and pass it backwards.

The Ecuador winger has made a career of chuffing up and down the flank in immaculately straight lines. Sometimes, it looked like Sir Alex Ferguson had painted Thomas the Tank Engine red and stuck him on the right wing, such was Valencia’s apparent devotion to staying on a single branch line. But for a while, it worked.

And we still don’t know how. Because Valencia never had a trick. The recruit from Wigan was the most predictable winger in Europe, but for a couple of seasons, around 2010, he was on fire. When Wayne Rooney was named United’s player of the season after scoring 26 Premier League goals in 2009-10, he credited Valencia for the assist. “I couldn’t have scored the amount of goals I have this season without him,” Rooney said. “The quality of balls he puts into the box has been unbelievable.”

That’s the other thing. Because once Valencia had somehow beaten his defender with neither disguise nor imagination, most of his deliveries where thundered across the box around shin height. Very occasionally he might vary it with the odd dink towards the far post, from where Rooney generally nodded it in, but more often than not, getting in the way of one of Valencia’s Exocets from the right represented a health hazard.

Perhaps it was inevitable that Valencia was shuffled into a right-back role because once that initial burst of pace started to wane, he had nothing in his locker to worry a defender.

Peter Beagrie
We can exclusively report that the former Everton, Manchester City and Bradford winger is still using the same trick, aged 53, and it still bloody works.

Beagrie made a 23-year playing career out of a simple dummy. A  fake to shoot or cross, lulling his defender into a false sense of security and the presumption the danger was covered, before cutting the ball back onto his other foot. If the full-back was lucky enough to recover once, they rarely did twice, and never the third time. Beagrie’s opponent just had to pray that cover was on hand while he regained his footing and his senses.

Unlike Robben or Valencia, Beagrie was happy going both ways. He could chop the ball onto his left foot to cross, or unleash a rocket with his right. On 103 of those occasions, all the way into his 40s, Beagrie was able to indulge in his other party trick: a somersault celebration.

Now in his 50s, Beagrie swerves the somersaults now but he’s still torturing defenders with the double and triple dummies. Admittedly, now it’s Dave the 40-something sparky in the veterans league or six-a-side pitch rather than international full-backs in the Premier League arena, but we at F365 know this to be true to because one of our own has been treated for twisted blood having gone to block many a Beagrie shot which never came. At least not when you thought it would.

It was a skill that helped Gibson stand out in a crowded field when coming through the ranks at Old Trafford. He was not quick, not particularly mobile, no discernible threat in the air and he probably hadn’t dribbled past a man since primary school. But Gibson could hit a ball far and hard.

“Darron is the one player in our club who can score great goals from outside the box,” Ferguson once claimed, presumably forgetting the existence Paul Scholes. “He has such tremendous power in his shot.”

4 – Just four of Darron Gibson's last 28 shots in the Premier League have been on target, with none of them resulting in goals. Blast.

Indeed, in 2010, Gibson scored one of his 10 United goals in the Champions League against Bayern Munich in just that fashion, while Scholes watched on from the bench. He scored similarly against Schalke in the following season’s semi-final. But that was as good as it got for the Derry-born Republic of Ireland international.

After United, he flopped at Everton before disgracing himself at Sunderland with a drink-driving conviction. The last we heard from Gibson, he was released by Wigan in May, around about the same time he sent his solicitor to court to say he was too busy to carry out his community service, while he was on holiday in Spain and without an employer for next season. Another long shot way off target.

Adama Traore
For an attacker with little technique to speak about, Traore is bloody exciting to watch. Because there are few players in the world game who can accelerate like the Wolves winger.

To look at him, you would not expect the 23-year-old to be rapid. Traore is built like a train but once he gets in his stride, he’s equally hard to stop.

Championship defenders certainly found that to be the case in the second half of the 2017-18 season, when Traore finished with five goals and 10 assists. According to Opta, he dribbled past an opponent on 267 occasions, 132 times more than any other player in the division. Traore’s stats also stood up to scrutiny in comparison to the game’s very best.

Such form tempted Wolves into paying a club-record fee for the Boro flier. But Nuno quickly sussed why Traore was yet to put down roots. His final product was generally bloody awful.

Such a sad day. Extraordinary talent the likes of which I have never seen in 50 years. Wolves fans you are lucky lucky bastards. Best wishes towards you lad and thanks for the memories #boro #wwfc #heartbreaking pic.twitter.com/PKuXxiG5su

In 67 top-flight appearances with four different clubs in England and Spain, Traore has only one goal and four assists. Consistency may well come for the former Barcelona schoolboy, but it seems a long way off.

So what? That’s for Nuno to worry about, or whomever might be his next manager should reports of his availability this summer be true. In the meantime, the rest of us should just get on board the Traore train. No one knows where it’s going or where it stops, but it’s a f*cking great ride.