Home F365 Features Return to sender? What’s next for the PL’s 30 loanees… 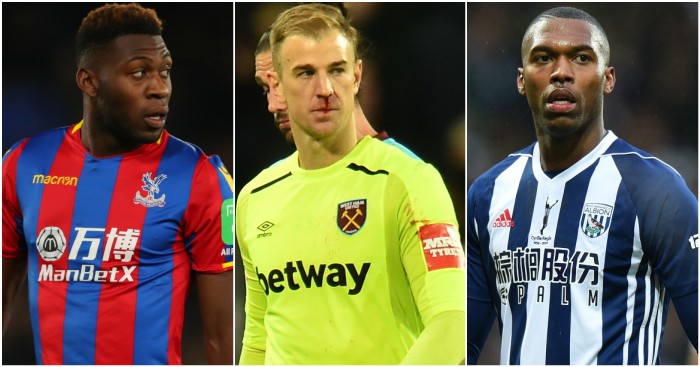 Brighton
Leonardo Ulloa (Leicester)
The striker said in February that he wants to convert his loan into a permanent deal, though he has failed to start since then, or indeed at any point in the Premier League since rejoining the Seagulls. Brighton are thought to have the option of buying Ulloa, though much will depend on how much Leicester want for a 31-year-old without a league goal since December 2016. Ten pence?
Next season? Still at Brighton.

Burnley
Georges-Kevin N’Koudou (Tottenham)
The winger had to wait for his opportunity to start for Burnley then failed to impress before being hooked at West Brom and Watford. The 23-year-old has managed 186 minutes in total, failing to offer either a goal or an assist.
Next season? Will return to Spurs before being loaned out again.

Crystal Palace
Timothy Fosu-Mensah (Manchester United)
The versatile Holland international has lost his place in recent weeks at Palace to Aaron Wan-Bissaka after dropping out of the XI when his parent club came to Selhurst Park. The idea was always for Fosu-Mensah to return to Old Trafford.
Next season? On the fringes of United squad at least until January.

Ruben Loftus-Cheek (Chelsea)
The midfielder was flying at Palace, earning his first England cap, before an ankle injury brought an abrupt end to his progress. Back in Hodgson’s XI over the last two games and claims to have made no decisions over his future.
Next season? Likely to remain at Chelsea for the first half of next season.

Erdal Rakip (Benfica)
The 22-year-old midfielder has failed to make an appearance in Palace’s XI, making the bench on three occasions before disappearing from view entirely over recent weeks.
Next season? Anywhere but Palace.

Everton
Eliaquim Mangala (Manchester City)
Damaged knee ligaments in his second game for the Toffees but City insisted he goes through his rehabilitation at Everton given he will be out of contract and leaving the Etihad at the end of the season anyway. Won’t be seen again in either a City or Everton shirt.
Next season? At whichever European club will take a punt.

Huddersfield
Jonas Lössl (Mainz)
Town have already triggered a clause in their arrangement with the Bundesliga strugglers to make the signing of their ever-present No.1 a permanent deal.
Next season? In Huddersfield’s sticks.

Terence Kongolo (Monaco)
The defender has made nine appearances including seven starts, predominantly at left-back, since joining in January. The 24-year-old will presumably return to Monaco and attempt to establish himself in their squad having only moved to Monte Carlo last summer from Feyenoord.
Next season? Back at Monaco initially.

Florent Hadergjonaj (Ingolstadt)
Town have an option to buy the Swiss right-back, who will presumably prefer to stay in West Yorkshire rather than return to his parent club in Bundesliga 2. The 23-year-old was in and out of Wagner’s side during the first half of his loan period before establishing himself in the XI since the turn of the year.
Next season? Probably still at Huddersfield.

Leicester
Aleksandar Dragovic (Bayer Leverkusen)
The centre-half enjoyed a run in Claude Puel’s defence at the turn of the year having spent the first half of the season on the bench. Dragovic did little wrong during that spell and though Wes Morgan has reclaimed his place, the Swiss defender could be signed permanently, especially with Robert Huth due to leave the club.
Next season? Likely to make a permanent move to Leicester.

Newcastle
Martin Dubravka (Sparta Prague)
Made our top 10 goalkeepers of the season despite having only played six games by that point and Newcastle will surely pay the £4million required to make him a permanent addition.
Next season? Newcastle’s No.1.

Mikel Merino (Borussia Dortmund)
The Spain Under-21 midfielder started so impressively that his season-long loan was changed to a permanent deal in October. Since then he has fallen out of favour somewhat and been linked with moves away in January and at the end of the season, with Athletic Bilbao heavily linked due to his Basque background.
Next season? Probably still at St James’ Park.

Kenedy (Chelsea)
The winger has been in great form since joining on deadline day in January, contributing two goals and a couple of assists, with Rafa Benitez admitting he could be pricing himself out of a permanent move at St James’ Park. But Newcastle have suggested they will look to reach an agreement with Chelsea now Premier League safety has been achieved.
Next season? Possibly Newcastle’s marquee signing of the summer.

Islam Slimani (Leicester)
A thigh injury has limited the centre-forward to only two substitute appearances but the Algerian has a great opportunity between now and the end of the season to earn himself a permanent deal, with Newcastle crying out for upgraded attacking options.
Next season? Could stay depending on Leicester’s terms.

Stoke
Kurt Zouma (Chelsea)
Paul Lambert would jump at the chance to bring the centre-half back next season but Zouma, 23, will return to Stamford Bridge, at least in the short term, in an attempt to impress whoever will be in charge at Chelsea. It seems to be now or never for Zouma with the Blues.
Next season? Back at Chelsea, initially at least.

Konstantinos Stafylidis (Augsburg)
The Greek left-back has been missing since the start of April with a rib injury but Stafylidis has made a good impression since joining in January. The 24-year-old has suggested he would be willing to stay and Augsburg would most likely be willing to shift him off their books, but much will depend on which division the Potters are playing in next season.
Next season? Likely to remain a Potter.

Jese (PSG)
Stoke are said to be trying to terminate their arrangement with PSG, with the Potters having granted the forward permission to travel to Spain to be with his sick child, though the child’s mother accused him instead of “smoking, drinking and f*cking in the bathroom” of a Madrid nightclub.
Next season? Loaned out again by PSG.

Swansea
Renato Sanches (Bayern Munich)
Due back in Swansea this week having returned to Bayern Munich for treatment on a thigh problem. Though his previous form – the midfielder was bafflingly poor in most of the 12 games he played – suggests he will find it difficult to get back in Carlos Carvalhal’s side and will almost certainly become Bayern’s problem again at the end of the season.
Next season? Loaned out again by Bayern.

Andy King (Leicester)
Both parties have already spoken about the prospect of making the midfielder’s loan deal permanent and with the Swans more likely to stay up, a deal with Leicester seems the most probably outcome.
Next season? Still at the Liberty Stadium.

Tammy Abraham (Chelsea)
This was supposed to be Abraham’s break-out season in the Premier League but it has not worked out quite like that, despite an impressive start earning the centre-forward a first senior England call-up in November. The 20-year-old is not ready to contribute on a regular basis for Chelsea and another loan next season seems most likely.
Next season? Loaned out again by Chelsea but might struggle to find a Premier League club.

Watford
Orestis Karnezis (Udinese)
Came into the team when Heurelho Gomes suffered a back injury and the Greek goalkeeper has kept his place since, rebuilding his reputation following a nightmare debut against Everton. The 32-year-old has 49 international caps and 108 Serie A appearances so he’s hardly a rookie. Given Watford’s ties with Udinese, a permanent deal should be straightforward.
Next season? Probably in Watford’s goal.

Molla Wague (Udinese)
Dropped from Watford’s 25-man Premier League squad in January so you would expect the chances of a permanent deal are slim. Though with Watford and Udinese, you never quite know…
Next season? Probably not at Watford but who knows?

Didier Ndong (Sunderland)
There are conditions in the midfielder’s loan arrangement that could facilitate a permanent deal but the chances of that seem slim given he has yet to kick a ball for the Hornets. Likely to be packed off back to Sunderland and League One.
Next season? Not wanted by Watford or Sunderland. Any takers?

Gerard Deulofeu (Barcelona)
Admitted that he couldn’t complain over the opportunities given to him by Barcelona before he was shipped off to Vicarage Road in January, since when he has been restricted to four appearances due to a foot injury. Most likely to return to Barca in the summer before assessing his options.
Next season? Entering the final year of his contract at Barca who will look to sell.

Andre Carrillo (Benfica)
The winger has been involved in 27 Premier League matches for the Hornets this term and with an option to make his move from Benfica a permanent one, the 26-year-old may well be sticking around.
Next season? Probably on the wing for Watford.

West Brom
Ali Gabr (Zamalek)
Hasn’t kicked a ball for Albion’s first team, making the 29-year-old unlikely to remain at the Hawthorns beyond the end of the season.
Next season? Almost certainly not in English football.

Grzegorz Krychowiak (PSG)
Will return to PSG in the summer after the Baggies paid his £110,000-a-week salary in full. Still, he told Alan Pardew to ‘f*ck off’ so it wasn’t a complete waste of time.
Next season? Not in PSG’s midfield.

Daniel Sturridge (Liverpool)
His loan spell has gone exactly as many feared it would, with injuries restricting the striker to just 83 minutes after Albion reportedly paid £2million to borrow him for half a season while also paying his £120,000-a-week wages in full.
Next season? Hoping for someone else to gamble on his fitness, which a Premier League manager probably will.

Joe Hart (18 appearances) has made as many errors leading to goals this season (four) as every other English goalkeeper in the Premier League put together (179 appearances).

Says it all. The England goalkeeper (if he remains that in the summer) will presumably return to Man City, who will try to shift him again for the final year of his contract, unless they simply write it off.
Next season? Someone in the Premier League will probably gamble on Hart’s form having been a blip. A two-year blip.

Joao Mario (Inter Milan)
The winger has made a rather more positive impression than Hart though when asked over his future, he admitted: “I am not sure yet. It depends on a lot of things and I have the World Cup.” Which suggests Mario is hoping for bigger and better things next term.
Next season? Depends on how he performs in Russia and what money West Ham put on the table.

Gallery: Check out the world’s most beautiful golf holes (Golf365).

Loose Pass: What rugby could learn from Man City and football (PlanetRugby).

Remembering when Rafa Nadal came of age on clay (Tennis365).