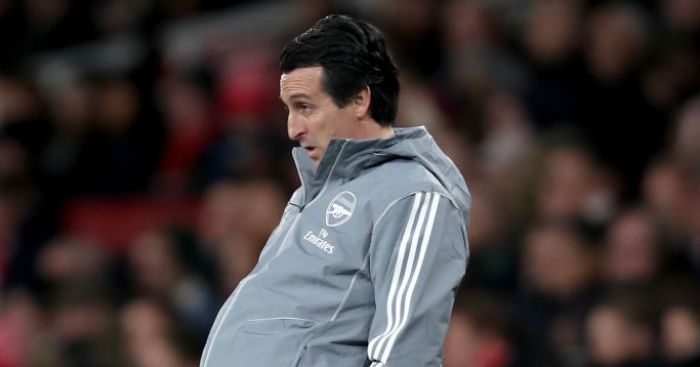 Coat stand
Unai Emery has been sacked by Arsenal. You might have heard. It is thus the biggest story in football on Friday by quite a margin. But you know what would make it even bigger?

‘Unai Emery forced into outfit change during Arsenal vs Eintracht Frankfurt’ is the Daily Mirror‘s offering on a man being asked to swap his black coat for a light grey one. Sorry, a man being ‘forced’ into an ‘outfit change’. Because that doesn’t make it sound like he’s pissed himself on the touchline at all.

Insert your own punchline.

But for the pinnacle of sports reporting, one must always visit The Sun. ‘GET YOUR COAT’ is their back-page headline to a story in which Mark Irwin informs us Emery ‘even suffered the embarrassment of being ordered to change his Arsenal jacket’.

Forget the actual defeat to Eintracht Frankfurt, the last-gasp draw with Southampton, the seven-game winless run for the first time since 1992 and the whole being really bad thing. The real ’embarrassment’ here is that Emery was asked to – and promptly did – change his coat to appease a protocol he was presumably completely unaware of. They pretty much had to sack him after that.

And then we go to Tom Sheen’s website story and, well…

His COAT? Surely not. What an EMBARRASSMENT.

‘In a football first, the Spaniard was rapped by the fourth official for his choice of attire.’

Tom Sheen presumably thinks Ole Gunnar Solskjaer wore a bib during Manchester United’s Champions League win away at PSG last season because he was uncontrollably dribbling, not because his black coat matched the home side’s shirts. This is ‘a football first’, folks.

‘But French fourth official Frank Schneider was not impressed and told Emery he had to make a change.’

Was he really ‘not impressed’? Or did he just need to follow some sort of UEFA rule, as is his actual job?

‘Luckily, the Gunners boss managed to find a grey coat in the kit bag.’

How lucky that this thing was found in the exact place one would usually find it.

Yeah, they were definitely ‘unforgiving after watching the under-pressure manager change attire’. It had absolutely nothing to do with watching them fail to win yet again while playing terribly.

Who wants to break the bad news to Charlie Nicholas, whose entire stable appears to have bolted? pic.twitter.com/Tk0Sby84d3

Silva cross
‘Everton like to think they have a bit of class about them,’ is a wonderful way for Neil Ashton to start his Sun column. Some truth bombs are incoming.

‘The People’s Club, as David Moyes memorably referred to them at his introductory presser way back in 2002, give the impression they do things the right way.’

‘He is a dead man walking, forced to take Everton to Leicester on Sunday because the board cannot agree on a replacement.’

Can a man be ‘forced’ to do a job for which he is handsomely paid? Is leaving a manager to manage really ‘shoddy treatment’?

And as for ‘dead man walking’, it was your colleague Ken Lawrence who exclusively revealed Silva would be ‘sacked within hours’ at about 4pm on Monday. That story is still on your website.

But no, it’s the Everton board’s ‘shoddy treatment’ of giving Silva more time than seems necessary that must be called into question, not the media.

Ashton goes on to describe Silva as ‘a patsy for this divided regime,’ and that his imminent demise ‘is no way for a leading manager to lose his job’. Everton, he says, should ‘take responsibility for a poor appointment’.

A reminder that Silva, not Everton’s board, has managed them to two wins in their last nine Premier League games, and 16th place after more than a third of a season which followed another summer of heavy investment. That is no way for a leading manager to keep his job, never mind lose it.

Ashton then points out that ‘the fixture list has not been kind to Everton’, who have faced (and lost to) all three promoted sides, as well as the teams that finished 7th, 10th, 11th, 12th, 14th, 15th, 16th and 17th last season. That Manchester City defeat and Tottenham draw are doing an awful lot of work there.

But by the penultimate paragraph Mediawatch is a little confused.

‘Everton are good to their new managers, giving them time to adapt to the challenges of operating in Liverpool’s shadow.’

So what on earth are you on about, man?

That seems a bit harsh, particularly after he threw them all in together in tough circumstances in a game where the result didn’t matter. Why call them out like that straight after?

“Some of these might benefit from going out on loan. They need men’s football and they got a taste of it here. But some of them have also done themselves a favour.”

Apathetic fallacy
‘The stadium was half full and an overwhelming sense of apathy was replaced by anger on a toxic night which really should spell the end for Unai Emery’ – John Cross, Daily Mirror.

‘Where there was anger there is apathy and that ought to be of far greater concern to those in the boardroom’ – Matt Barlow, Daily Mail.

So which one was it?

Did it really take two of Sami Mokbel’s colleagues to exclusively work out how many games ‘defeats to Chelsea and Wolves’ constituted?

UEFA thin
Martin Samuel’s wider point about the UEFA Nations League having merely ‘contributed’ to the ‘dumbing down’ of the European Championship seems fair. The contrived and convoluted nature of the play-offs has, in particular, complicated and diluted the qualification process.

But his ‘let’s have a brief run through the teams who could yet be gracing what was once the most ferociously competitive tournament in international football’ is a lovely preface to some sneering snobbery.

Should Bulgaria be dug out? Absolutely. They’re a bit sh*t and could still qualify. The same stands for Georgia, Belarus and Israel, each of whom could still make Euro 2020.

Yet calling out Kosovo, ‘who conceded a mere nine goals to England in the group stage’? They have won 11 of their last 19 games and are one of only three teams to score three goals or more against England since 2013.

Shaming Northern Ireland, ‘whose 8-1 aggregate defeat by Germany proved no hindrance’? They came within ten minutes of beating the Netherlands, drawing with them at home after missing a penalty. They have also won six of their last ten games.

Under a headline of ‘EVERYONE LOVES A LOSER AT UEFA’, it seems a little harsh. Northern Ireland lost fewer games than automatically qualified Finland; should we be mocking them too?

Headline of the day
”No’ to Morrow for Arsenal’ – Daily Mirror.

Recommended reading of the day
David Conn on the David Duckenfield trial.