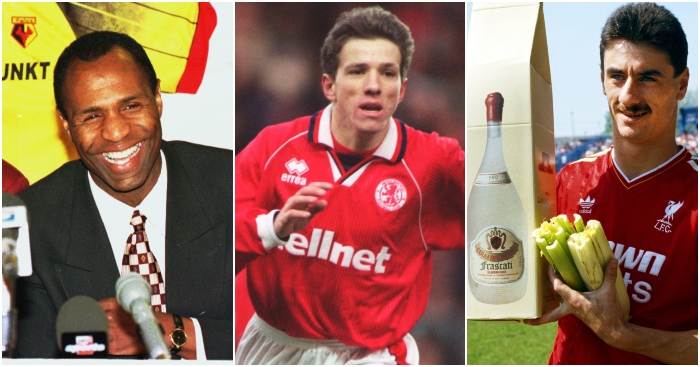 Liverpool are allowing Rhian Brewster to join Sheffield United but the Reds have reportedly retained a buy-back option on the striker. Here are five occasions one was actually taken…

The forward’s relationship with Wolves is best described as ‘complicated’. Afobe scored 23 goals in 46 appearances in a year-long stint at Molineux up to January 2016 when he was sold, reluctantly, to Bournemouth for £10million.

“Benik was no longer trying to play for us,” Wolves’ chief Kevin Thelwell explained. “That was undermining everything we were trying to achieve.” Jex Moxey added: “We were forced into doing a deal that we didn’t want to do.”

Two years later – in January 2018 – Afobe and Wolves buried the hatchet by arranging a loan deal for the forward as the Championship leaders looked to wrap up promotion. His six goals helped Wolves do just that, and when the Championship title was won, the club exercised their option to buy back Afobe by basically giving Bournemouth their money back.

But Wolves were banking on Afobe for a quick profit, rather than Premier League goals. Just 11 days after re-signing for Wolves, the striker was sent to Stoke – initially on loan, though the relegated Potters were obligated to buy Afobe in January 2019 for £12million. At the time Stoke handed over that wedge, they had received six Championship goals in return for their investment and only two more followed. Afobe is currently on loan at Trabzonspor.

The England winger moved from Rangers to Marseille, in the process equalling the highest transfer fee involving a British player with his £5.5million deal coming a month after David Platt had moved to Bari for the same figure.

Rangers insisted on having first refusal should Steven ever return to Britain and that option was presented to them rather quicker than they probably imagined. Marseille’s finances had unravelled spectacularly and halfway through Steven’s first season in the south of France, Gers chairman David Murray knew a return was on the cards, with Marseille struggling to afford the remaining £2.2million due to the Glasgow club.

“We insisted on having the first option on Trevor in our agreement with Marseille,” he said. “The final payment from them is due on March 31 but we all know that French football is in a bad way. If they can’t make the payment, we’d be delighted to have him back.”

Newly-crowned English champions Leeds were interested in Steven but Rangers exercised their right to reclaim the player, who picked up another five title medals before retiring in 1997.

The little Brazilian didn’t want to leave Boro upon their relegation in 1997 but with his national team place at stake, he knew he had no option. “I had an offer from Liverpool – their coach even phoned my dad,” he later told FourFourTwo. “The problem was that the numbers were much lower than those Atletico Madrid had sent us. Manchester United also thought I was too expensive and didn’t make a move.”

So off he went to Madrid, though Boro remained hopeful that it was the not the end of a beautiful relationship. They inserted a buy-back option into the £12million deal that took him to Spain. “That option is not there for show,” said Boro chief executive Keith Lamb. “It’s there because we have a genuine interest. If he wants to leave Spain, we can have him back here at Middlesbrough.”

After a disappointing, injury-ravaged spell at the Vicente Calderon, Boro – by now back in the Premier League – followed through on that interest but only a loan could be agreed in 1999, when Juninho scored four times in 24 games. A brief return to Brazil preceded Juninho eventually going back to Teesside on a permanent basis, where he remains a legend.

One last Juninho highlight from that: him taking approximately zero shit from Philippe Albert and Colin Hendry. pic.twitter.com/rQKPm9d7e2

Juventus bought Rush for £3.2million  – a record for a deal involving a British club  – in 1986 but allowed him to stay at Liverpool on loan for the 1986-87 season. The Wales centre-forward wasn’t worth the wait for Juve, for whom Rush only scored seven goals. “It was like living in a foreign country,” Rush said. Or not. Kenny Dalglish is presumably still sniggering to himself over that one.

Liverpool’s first refusal was more of an informal agreement, according to The Guardian, with the Reds perfectly willing to give Juve £2.8million of their money back in return for Rush.

It wasn’t the first time Liverpool had made such an arrangement with a European club. The Reds inserted a buy-back clause into the deal which took Kevin Keegan to Hamburg in 1977, though Reds chief Peter Robinson was not sure the club would be able to exercise it: “I would not like to say whether this agreement is legally binding,” he said at the time. “It could possibly be considered a restraint of trade. But it was willingly signed by Kevin, who has said that he would not do anything without talking to us.”

Keegan later recalled the conversation between Southampton boss Lawrie McMenemy and Robinson when the player was looking to return to England: “Peter said ‘No, we won’t be signing him, definitely, we don’t need him.’”

Ian Rush and his mum celebrate his move to Juventus. pic.twitter.com/dElJjXMZUU

Blissett’s 27 First Division goals for Watford led AC Milan to make the Hornets a £1million offer they couldn’t refuse, according to Graham Taylor: “Milan offered us a deal that we couldn’t turn down and it would have been morally wrong to prevent Luther from going.”

But Blissett struggled in Serie A, scoring only five goals, with the Rossoneri refusing to play to the new boy’s strengths. “In some games here you’re lucky if you get a single chance and it’s usually no more than a half-chance,” he said in mitigation of his failure. “I keep telling them to knock the ball over the top but they won’t risk it. They’re scared to hit 30-yard balls in case they lose possession. It couldn’t be more different from Watford.”

It was suggested that Milan had bought Blissett by mistake when it was John Barnes they actually wanted, but there was at least an escape route back to Hertfordshire. Blissett, who apparently complained that “no matter how much money you have here, you can’t seem to get Rice Krispies”, had a clause in his contract offering Watford first refusal if he was to leave the San Siro. “Of course I would like to go back there,” he said and the Hornets granted his wish while pocketing a tidy profit after completing the deal for just over half the amount they received the year before. With a belly full of snap, crackle and pop, Blissett bagged 21 goals during his first season back in English football.