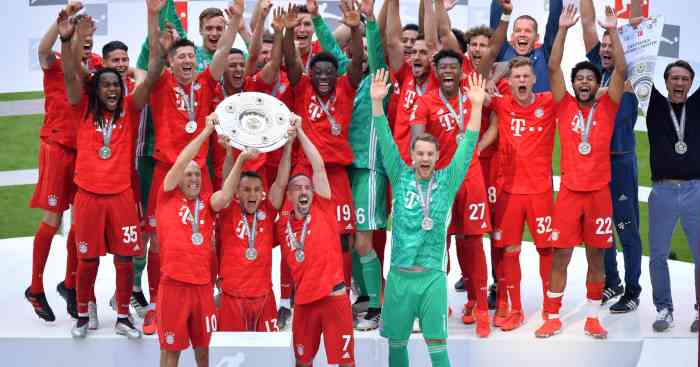 Arjen Robben and Franck Ribery scored on their final appearances for Bayern Munich as a 5-1 home win over Eintracht Frankfurt wrapped up a seventh successive Bundesliga title.

Robben and Ribery started the game on the bench and although the visitors briefly drew level early in the second half, Bayern recorded an emphatic victory which saw them edge out rivals Borussia Dortmund.

The build-up had all been about Bayern’s departing stars and they duly obliged with both wingers scoring soon after coming on.

By then Bayern were in command thanks to goals from Kingsley Coman, David Alaba and Renato Sanches, even if Sebastien Haller had drawn the visitors level five minutes into the second half.

Despite the defeat, Frankfurt finished seventh in the Bundesliga table and with it a qualifying place for the Europa League, a competition they reached the semi-finals of this season before losing to Chelsea in a penalty shoot-out.

Bayern took the lead after just four minutes as Coman took a pass from Thomas Muller and shot into the bottom corner.

The home side were caught offside a number of times in the opening 10 minutes as they looked to add to their early advantage.

Kevin Trapp conceded the game’s first corner when he saved a long-range shot by Alaba with nine minutes on the clock before Robert Lewandowski headed narrowly over from the flag kick.

Jonathan De Guzman had Frankfurt’s first effort after 12 minutes but Sven Ulreich was able to make the save.

Koman missed the chance to double his tally with a header wide of the goal midway through the half.

Gnabry fired into the bottom corner from outside the area after 26 minutes only to see his goal ruled out for offside after a VAR check.

Gnabry and Muller both went close before Mijat Gacinovic fired well over for the visitors as the half drew to a close.

Ante Rebic was wide with a shot for Frankfurt in the closing minutes of the half but the visitors quickly made early pressure tell after the break to draw level.

But two goals in the space of five minutes put Bayern in charge with Alaba converting from a couple of yards out after 53 minutes.

Five minutes later Sanches doubled their lead when he finished from a difficult angle.

Ribery, a second-half substitute, had been joined by Robben on the pitch before the Frenchman set the seal on his Bayern career with the fourth goal.

Joshua Kimmich set up the chance for Ribery, who scored his 124th goal in Bayern colours with 18 minutes remaining before being booked for removing his shirt during the celebrations.

Six minutes later Robben got in on the act when he finished from close range to make it 5-1.

Robben went close with several attempts to score a sixth goal but Bayern had already done more than enough to secure the victory and the title.