Home All The News Rice: England laid down a marker by beating No.1 Belgium 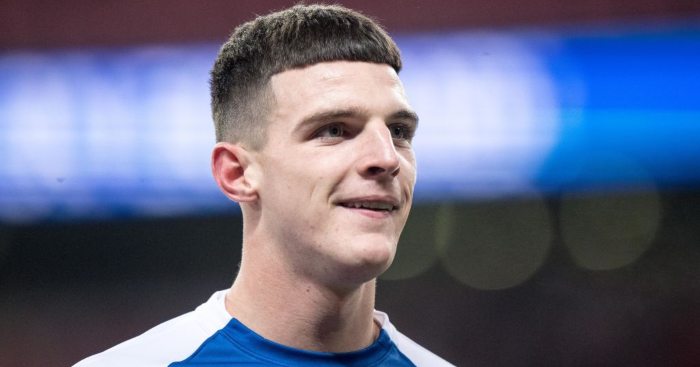 Declan Rice believes ever-improving England laid down a marker by digging deep against Belgium to secure a comeback victory against the top-ranked side in the world.

Gareth Southgate’s men looked like they could be in for a chastening loss on Sunday after a Romelu Lukaku spot-kick gave Roberto Martinez’s Red Devils a deserved lead during a one-sided start.

But England levelled through a Marcus Rashford penalty and rallied in the second half, with Mason Mount’s deflected effort securing a 2-1 win that saw them usurp Belgium at the top of their Nations League group.

The Three Lions displayed the kind of spirit and nous often lacking against the top nations and Rice believes that performance underlined their status among the favourites for the rearranged European Championships.

Asked if England set a marker down against Belgium, ranked number one in the world by FIFA, Rice said: “Yeah, definitely.

“Look, we knew before the game that they’re the number one team in the world and that’s where we’re aiming to be.

“When you’re at international level like this, you want to test yourself against the best.

“They had world-class players all over the pitch and obviously a couple of missing, but it was a great test.

“Right towards the end there we were digging in deep.

“They were putting the pressure on but we stood firm, stood tall and at times tonight we played some great stuff, obviously scored two goals.

“To beat them, the lads are delighted for sure.”

Rice says matches like Sunday’s are “massive” for England’s callow squad, with the West Ham midfielder punching the air at full-time having beat the “best team in the world”.

“It was kind of relief that the 96 minutes went and just a punch in the air that we’ve beat them and that we’ve done so well,” said the 21-year-old, who currently sees himself as a defensive midfielder rather than defender.

“This is the mentality we need to get ourselves into heading into tournaments because there’s going to be games where we will be pinned back, where we need to show the grit, desire to come out on top and give 110 per cent every time.”

Rice certainly had to have his wits about him against Kevin De Bruyne-inspired Belgium, but he held his own as he won his 10th cap – a tally that is surprisingly the second highest of England’s midfield options.

“When I first come in, my first ever camp, you know I was a bit nervous,” the Hammers academy graduate said. “Obviously I’ve never been in an environment like this.

“But now tonight was my 10th cap. I’m feeling more and more at home every time.

“Ten caps so I’m just aiming for many, many more, so, yeah, I’m really happy.”

Playing without supporters in cavernous stadiums never gets normal and the West Ham midfielder hopes fans can be eased back sooner rather than later, although the Covid-19 uptick in England will make that tougher.

“I think if you asked half the Premier League players – probably all of them – if they wanted fans back, they’d all tell you 100 per cent.

“Obviously the circumstances we’re in that’s not happening, but I think there has to be a time now where we can start letting fans back in.

“I think the other I saw a game at Dortmund where they let 12,000 in and I think that’s the way we’ve got to start going, to let them back in gradually.

“It’s really odd playing without fans. Obviously on the pitch you don’t feel the atmosphere as much. You feel it yourself that you’ve got to perform well but from the fans it gives you that extra edge.

“Without them here, it’s really hard so hopefully by the time the Euro comes everyone’s back in, we’re back to normal and we can get the fans back on our side because it’s really odd not having them here and in the Premier League.”