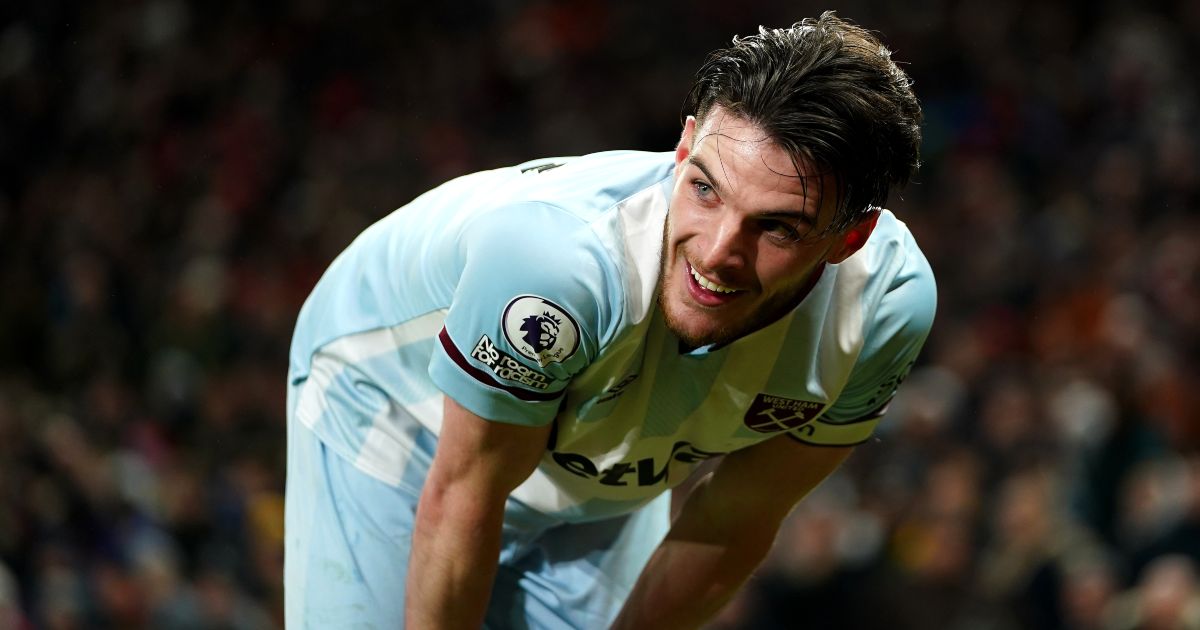 West Ham midfielder Declan Rice has admitted that Old Trafford is one of his “favourite places to play” amid speculation he could move to Man Utd in the summer.

Rice’s impressive form over recent years for the Hammers and the England national side have seen him linked with a move away from the London Stadium, with Old Trafford tipped as a likely destination.

The midfield at Man Utd has come under intense scrutiny, much like the rest of the club, as the likes of Fred, Scott McTominay and Nemanja Matic struggle to impress.

Paul Pogba is also out of contract this summer and a new deal doesn’t appear to be on the horizon, it looks likely that the French midfielder could be on his way out of the club.

The Sun claimed earlier this month that Man Utd will have more of a chance to complete a £100m deal for Rice if West Ham miss out on a Champions League place this season.

And following the Red Devils’ last-gasp 1-0 victory over the Hammers on Saturday – which bumped Man Utd into the top four – Rice said that Old Trafford was one of his “favourite places to play”.

Rice said: “I was loving it. Every time I come to Old Trafford, I’ve always said it’s one of my favourite places to play. It’s an amazing stadium.”

Our fans were incredible today. Thank you for your support yet again! Gutted to lose the game like we did. We will keep pushing❤️⚒️

West Ham boss David Moyes recently praised Rice’s development. He said: “I’ve been here twice. On the first occasion, he was a young boy making his way playing centre-half most of the time.

“Since I have come back he had already developed into a midfield player.

“I think in the last two years he has stepped up his leadership, his playing. I think everybody would see him as an England player at the moment.

“Declan has played really well for West Ham. I think he can keep moving on.

“I think he’s got little bits of his game he can add to and we are at him all the time to keep improving, to keep driving the team on and show those leadership qualities which I think he’s already got for a young man, but they will get better as he gets older as well.

“Being captain of West Ham is a big deal when you look at the great captains at this club over the years, none more so than Mark Noble. He has a role model to look up to in Mark Noble and we hope that Declan can keep carrying it and improving.”