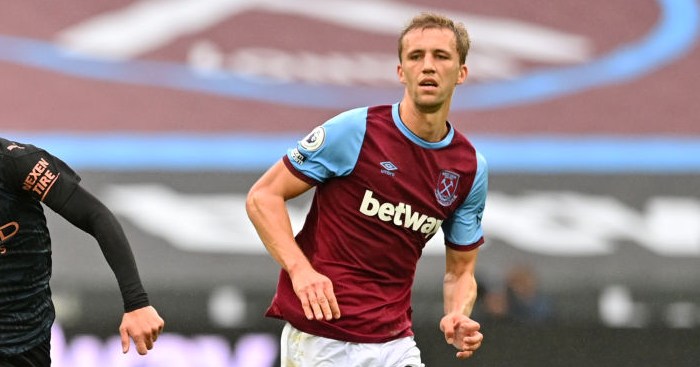 Soucek initially joined West Ham on loan in January 2020 for the remainder of the 2019/20 campaign.

He immediately caught the eye with some impressive performances. Soucek played 13 times and scored three goals to help the Hammers finish 16th in the top flight.

Early winners: West Ham, Moyes and their ‘bubbles and bicycles’

His loan deal included an option to buy and West Ham acted quickly to tie him down to a longer deal this summer. In July he put pen-to-paper on a four-year contract at the London Stadium, signing from Slavia Prague for around £19m.

Soucek has kicked on from where he left last season as he has enjoyed a strong start to the new campaign. After their 3-3 draw with Tottenham, Jose Mourinho likened him to Marouane Fellaini because of his quality in the air.

The Czech Republic international has also earned the plaudits from the West Ham faithful. Soucek’s energetic performances have helped him become a fan favourite at the London Stadium.

West Ham are in good form of late, having picked up convincing wins over Wolves and Leicester City. They also came from 3-0 down to get a point against Spurs, before they drew with Man City this weekend.

Soucek has been one of the main reasons for their recent success. In an interview for the club’s official website, Rice said it is “fantastic” to play with Soucek:

“He’s brilliant to play with. He’s a player we definitely needed, with some legs to make the box and obviously get back as well.

“He’s added something to the team, which is brilliant. He gives us an out every time and when he’s popping up in the box, we’ve not really had that over the years. It’s fantastic to play with him.”