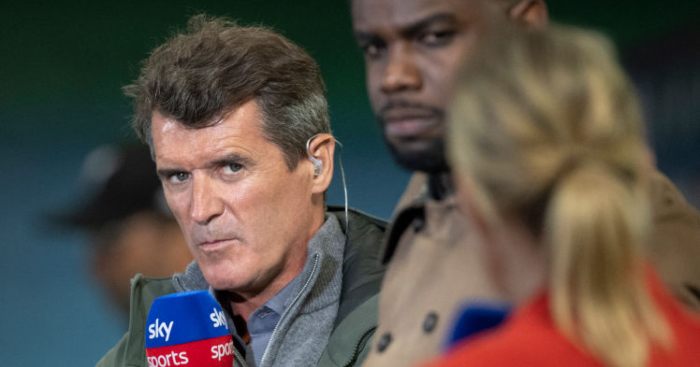 Richard Keys has labelled Roy Keane “a disgrace” after he called Manchester City defender Kyle Walker “an idiot” during their recent draw with Liverpool.

Walker brought down Sadio Mane in the 13th minute of the Premier League contest at the Etihad Stadium earlier this month, with Mohamed Salah converting the resulting spot-kick.

City’s players felt Raheem Sterling had been fouled in the lead-up to the incident but their protests were waved away by referee Craig Pawson.

Roy Keane as pundit: 25 of his best and most cutting lines

Analysing the game for Sky Sports, former Manchester United captain Keane said: “I think it is an initial foul but I think the referee, to be fair to him, is looking at Sterling and thinking he’s in the penalty box, he’s taken another touch on the ball and trying to play the advantage.”

Asked by presenter David Jones how Mane earned himself a penalty seconds later, Keane added: “Because he’s up against an idiot.

“Kyle Walker, people tell me he’s playing well – I don’t think so. I think this guy is 30 years of age, international player… he’s a car crash, keeps making these types of mistakes and rightly punished for it.”

Man City have now complained to Sky Sports about the language Keane used and their former presenter Keys has heavily criticised the former Manchester United captain.

Keys wrote on his own website: “We were always very much aware that if we were going to criticise then it had to be done constructively.

“That we could offer both explanation and education.

“Andy Gray did that better than anyone else – and he’s still doing it. Teams and their managers back then were so sensitive.

“I can only imagine what would’ve happened If we’d ever called Gary Neville a ‘car crash’ and an ‘idiot’. And there were plenty of opportunities!

“You can see where this is going can’t you? What a disgrace Roy. Cheap. Even by your standards. How would you have described your assault on Alf-Inge Haaland – an incident that would’ve seen you arrested anywhere other than on the pitch?”

Keys continued: “We all remember Keane in 2008 hammering me – saying ‘he’d rather go to the dentist’ than be an analyst – actually, I’ll use the word I hate ‘pundit’ – because few actually ‘analyse’ anything these days.

“He added that I sold ‘something that was built purely on hype’.

“He also once said ‘there are ex-players and ex-referees being given air-time who I wouldn’t listen to in a pub’. Quite Roy. And you’re now one of them.

“His barbed jibes might have more impact if his managerial career had been anything to get excited about. But it wasn’t. At Ipswich it was a ‘car crash’. Sunderland wasn’t much better and let’s not get into what he left behind when he finished as Ireland’s asst. manager.

“I know a few of his ex-team mates were furious that he was welcomed back into the fold after he’d walked out on them in Japan. I know. I know. Mick McCarthy sent him home – but Keane wanted to go.”