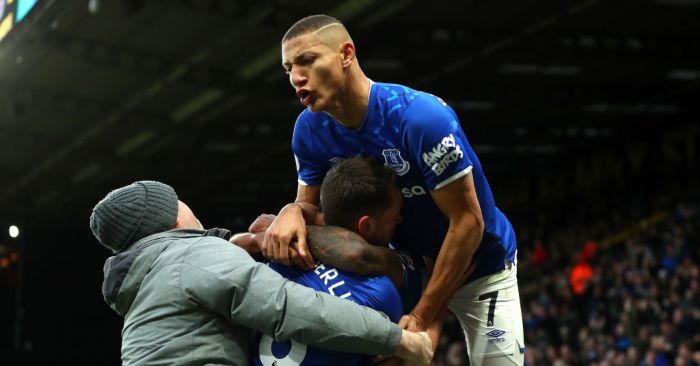 Transfer deadline day has to be among the most ridiculous spectacles in modern football. It is completely oversaturated by the media who, having taken note of some cases of organic drama with only hours of the market remaining, stage programmes to create a false illusion that it is an annual occurrence. But it is easy to understand how it got to that stage: twice a year, in the winter and the summer, panic can begin to set in. Planning goes out the window and ‘regular market value’ soon follows. It can lead to some interesting developments, such as Barcelona’s rather bizarre bid for Everton star Richarlison.

There can be no doubting the Brazilian’s quality and his impact on the Premier League, but there was so much that didn’t add up about the offer.

First, and most importantly, the size. €100million (£85m) was offered and instantly turned down by the Toffees, and it instinctively felt like a sum that was well above his actual value. Also, there had been no prior mention of interest from Camp Nou in his services, despite it being well-known that they were looking for a striker after an injury to Luis Suarez which is likely to keep him out for up to four months.

It is strange to think that Barcelona, the club who mastered the blend of youth development and transfer strategy at the height of their dominance, would fall into the trap of panic bidding, but that was seemingly what happened.

Since, there have been reports suggesting the club couldn’t have afforded Richarlison. Nor did they actually need him; Antoine Griezmann was signed as an alternative or even replacement for Suarez and he has begun to look like one of late.

Another bid in the summer seems unlikely, but should one come in – from Cataluña or elsewhere – Everton should really consider it if it is at that level. Money spent hasn’t been an issue before, they have shelled out enough to challenge for the top six, but the recruitment itself has prevented them from doing so. While Richarlison is one of the few players who have signed for big money – up to £50m back in the summer of 2018 – to succeed, they could markedly improve one or two different areas under Carlo Ancelotti.

Selling a key player isn’t about what happens when they leave, but rather the reaction that follows.

Rejecting that bid made a lot of sense from a timing point of view. Allowing such a big player to depart with no time to replace him would cause anxiety within the club and fanbase, no matter the fee. Richarlison is also very well thought of in his homeland; the Brazilian media are priming him for superstardom, and for a 22-year-old, he is developing quickly. His friendship with Neymar is helping his cause, too.

Had the offer been accepted, though, the benefits would have been clear in the longer term. Ancelotti’s key work will start next season. There is too much water under the bridge to call this term a success, and qualifying for Europe seems slightly out of reach anyway, even if the table doesn’t suggest as such. Relegation fears are a thing of the past, so taking such an inflated deal would have made plenty of sense. Richarlison is a good player, popular with the Everton fans and someone who could be key for Ancelotti, but in a team that has struggled to find an identity, there is definitely scope to grow without him, even if there is a little suffering first.

The situation may be completely different at the end of the season; the boat could well have been missed. But Barcelona’s issues have been magnified by their role in this. Big issues are coming for them as they continue to flounder in terms of what they really stand for anymore. They may still be a force in La Liga, and maintaining the high standard of the last decade was always going to be difficult, but their academy isn’t producing as it once did and their reliance on Lionel Messi is patently clear – more so than ever, in fact. He won’t be around forever, and if they approach bids and deals on a whim instead of the required planning they were known for, there could be trouble ahead.

Looking back, it was easy to see why Everton turned the bid down, but equally easy to see why they should have taken it. They can grow without their talisman, who arguably doesn’t stand out enough to earn such a title anyway. This isn’t the first time Barcelona have made themselves look disorganised when it comes to transfers. Bids for Willian have proven questionable, as has Chelsea’s consistent rebuttal of them, and even the move for Philippe Coutinho turned sour very quickly, despite appearing like a sensible move at the time.

Everyone should watch Barcelona to see what they do next. Their flirtation with Richarlison was bizarre and troubling. It’ll be interesting to see if it develops any further in the summer; logic suggests it won’t but should that happen, Everton must be prepared to capitalise.