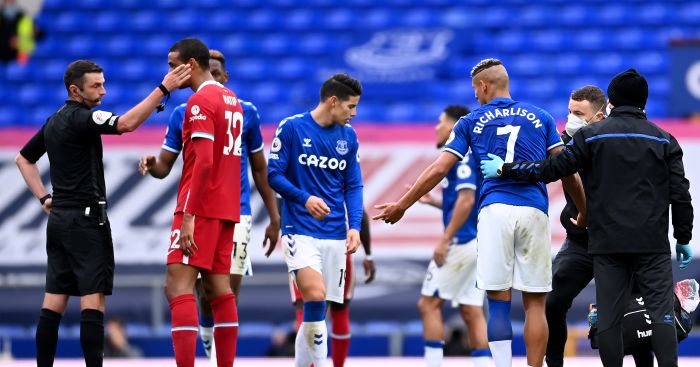 Having angered Liverpool fans already febrile enough after the various VAR shenanigans in Saturday’s 2-2 draw by getting sent off for a horror tackle on Thiago, Everton’s Richarlison has infuriated the Reds further with some hastily deleted twitter misjudgement.

Yes, unfortunately this is one of those “took to Twitter” stories, so strap in. Initially, it was going as you’d expect. Having so thoroughly shat the bed, Richarlison at first did what all footballers do in that situation. He released a statement on his website that is sort of an apology but with a clear undertone that he considers himself to be the real victim in all this unpleasantness. It was the usual stuff – “sorry and that, not that kind of player, sorry, sorry, not my fault, sorry, move on, sorry.” Not great, but not bad or particularly controversial.

If you want the full text, here you go…

“Everyone who knows my background knows that I was never a violent player.

“What happened today was a fatality from sheer over-dedication. I did not enter that dispute with the intention of hurting Thiago.

“When I saw that the crash was going to happen, I picked up my foot and hit him with my knee in the pass, which was inevitable due to the speed of the play.

“I already sent a message to him apologising and I also do it here publicly. I hope he hasn’t been hurt and that everything is fine.

“I also apologise to my teammates, my club and my fans for leaving them with one less at the end of the game.

“Unfortunately, there is nothing I can do to change what happened, other than to reflect, work and move on. Richarlison.”

After that, things got a bit more interesting, with Richarlison tweeting and then deleting a picture of his challenge on Thiago in an apparent attempt to suggest it wasn’t really as bad as all that (it was).

Are you alright in the head @richarlison97? pic.twitter.com/TPafs8aO09

He also took exception to a claim he had “done this repeatedly” in a tweet that is still visible on the website famed for its cool and level-headed reaction to any and all events.

repeatedly? When did I do this before? 🤔

It’s going to be good fun if fans are back in grounds by February for the reverse fixture. Every chance that one’s another top-of-the-table clash as well, based on what was, in between moments of idiocy and controversy, a bloody fantastic game of football at Goodison.