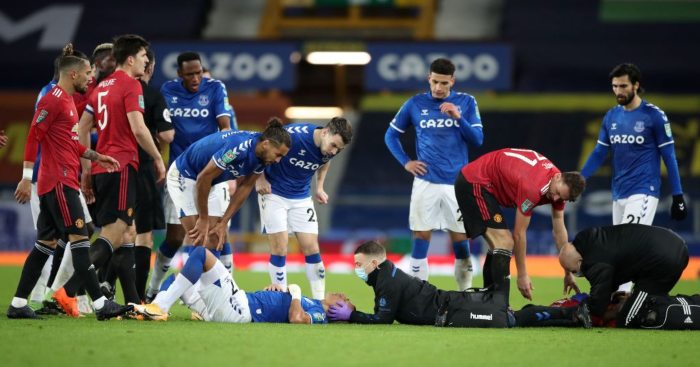 Everton forward Richarlison has no animosity towards Eric Bailly despite the fact the Man Utd defender’s challenge has likely sidelined him for part of the Christmas programme.

The Brazil international was forced off in the 2-0 Carabao Cup quarter-final defeat after taking a heavy blow to the head as Bailly jumped for the ball and sandwiched his opponent against Bruno Fernandes.

Richarlison was determined to continue but Everton’s medical staff stepped in to insist he did not return to action after an apparent concussion.

The 23-year-old will be assessed over the next couple of days but he could be forced to sit out the Boxing Day trip to Sheffield United and the visit of Manchester City a couple of days later.

“To everyone who sent messages and is worried – I’m fine,” Richarlison posted on Twitter.

“It was more the fright and the image that was ugly. Bailly apologized to me later, and it’s all right. Something that happens in the game.

“Thank you for the affection and concern of you guys.”

Man Utd defender Bailly offered his best wishes in an Instagram post, to which Richarlison responded “No problem. You are a very good defender. Thanks for the message.”

Everton are also set to be without playmaker James Rodriguez for a fifth successive match as the Colombia international is struggling to fully recover from a calf injury.

That leaves manager Carlo Ancelotti without three of his key players as midfielder Allan is also out with a hamstring problem.

The Italian had spoken earlier this month about having to rest Dominic Calvert-Lewin, who has started every Premier League match and played the majority of minutes in each.

After his hot streak at the start of the season, the newly-capped England international has not scored in four matches but with Richarlison and Rodriguez out there is even greater emphasis on his qualities as chances have been few and far between recently.

“It is really difficult but we have to adapt to this,” said Ancelotti.

“It is a busy period, we have to manage injury and players do tire but we have a squad and we are able to manage this and for all the teams it is the same.”