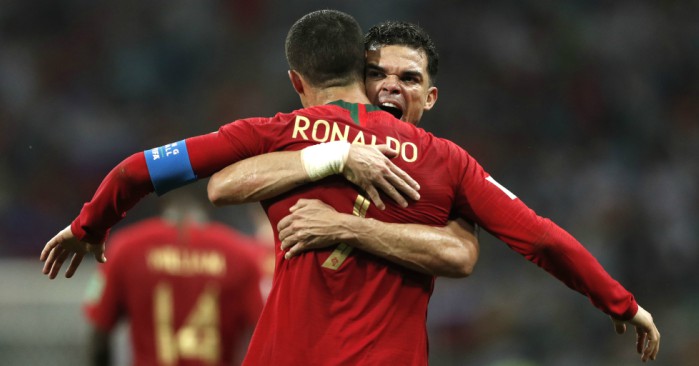 When you watch Cristiano Ronaldo go through his quasi-religious routine of the steps back and sideways, the repeated puffing-out of the cheeks, the pulling-up of one side of his shorts, the controlled breathing and the widening of his eyes in total focus, you might – if you were a cynical old sod – think, well frankly, ‘what a cock’.

You might dismiss those carefully choreographed movements as the dance of the narcissist, aware that the eyes of the world are upon him. You might hope he misses the target – or better still, hits the wall – so you can now watch the raise hand, the glance up at the sky, the biting of the lower lip and then the glance down to a turf that fails to provide a scapegoat.

And then he scores and you find that you are up on your feet, cheering and saying the word ‘wow’ over and over again with all the enthusiasm and lack of imagination of a child who has learned a new word at nursery. Then you instantly realise that you have not been watching the dance of a narcissist, but the regimen of a near-perfect machine who has calculated over a magnificent career exactly how to give himself the greatest chance of scoring a free-kick. All that cynicism disappears and you are thankful that he has graced this game and this World Cup. We are truly blessed.

He was far from the finest player on the pitch in this ridiculous blockbuster of a first-round match – that honour surely falls to his Real Madrid teammate Isco – but if we judge on impact, if we judge on making a difference, if we judge on wow, wow, wow, then this nascent World Cup already belongs to Ronaldo. He finally brought his A game to the A tournament.

One goal was a penalty and one was a gift from the increasingly generous – for Spain at least – David De Gea, but the third goal was pure majesty. To execute that level of skill under that kind of pressure is truly astonishing and should impress even the staunchest of haters. He might have touched the ball fewer than half the times of Isco, but not one of Isco’s 123 touches created a chance, never mind scored a goal. Spain and Isco may claim a moral victory with all their possession and all their prettiness, but Ronaldo made his and Portugal’s point: Goals win (or at least draw) games and nobody is better than Ronaldo at the business of scoring goals.

Before kick-off the BBC highlighted Ronaldo’s pathetic conversion rate of 4% at World Cups, highlighting his propensity to represent Ronaldo rather than Portugal at major tournaments. But victory at Euro 2016 seems to have at least partially quashed that individualism and a mellower Ronaldo scored with three of his four shots against Spain, dragging his conversion rate up to a far more respectable 8%. At 33, Ronaldo might just be about to peak.

This magnificent game had everything – wonderful goals, fantastic football, plain sh*thousery – with the backdrop of supposed Spanish disharmony, but the final word belonged to Ronaldo. And even this cynical old sod cannot begrudge him that stage.