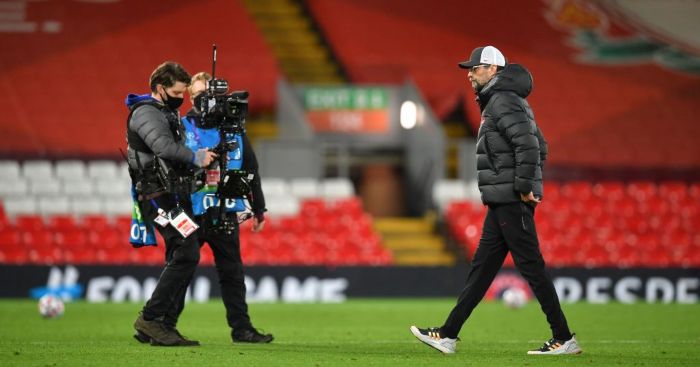 Rio Ferdinand has told Jurgen Klopp to “get on with it” after the Liverpool boss called out BT Sport for scheduling their match against Brighton for 12.30pm on Saturday,

Liverpool have been hit by a number of serious injuries to key players this season with Klopp calling on the football authorities to be kinder with the fixture schedule.

Klopp left a number of his best players out of his starting XI last night as the Reds lost 2-0 to Atalanta in the Champions League, with the result ensuring there would be no option for Klopp to rest players in both of their final two group games.

Victory over Ajax next week would still guarantee safe passage and with December’s schedule, Klopp will want to avoid the nightmare scenario of having something to play for with the final game against Midtjylland.

Klopp has been frustrated by broadcasters’ format for showing live matches this season and the German boss again raised the issue after their loss to Atalanta.

“I am afraid to say but I think it (not a shot on target) could happen not only to us, but it could happen to other teams as well,” Klopp said.

“It has nothing to do with that game tonight, but congratulations for that.

“My only interest at the moment is just I get the thumbs up, nobody injured, let’s recover immediately, take it (disappointment), but we don’t have time for it to be honest so it is just get fresh legs as quick as possible and go again, that’s it.”

Reacting to Klopp’s words, Ferdinand had little sympathy for the Liverpool manager with several clubs in the “same boat”.

“You can look at it both ways. Everyone is in the same boat, really, it doesn’t make it right, but you’ve just got to get on with it,” Ferdinand said in the BT Sport Studio.

“If you look at Liverpool’s squad, the depth of their squad, they’re sitting in a better position than most because of the depth they have. They’ve had a few injuries as well, but it’s a challenge.

“You can understand his frustrations, I don’t think he’s the only person, but he’s just the loudest one speaking at the moment.”