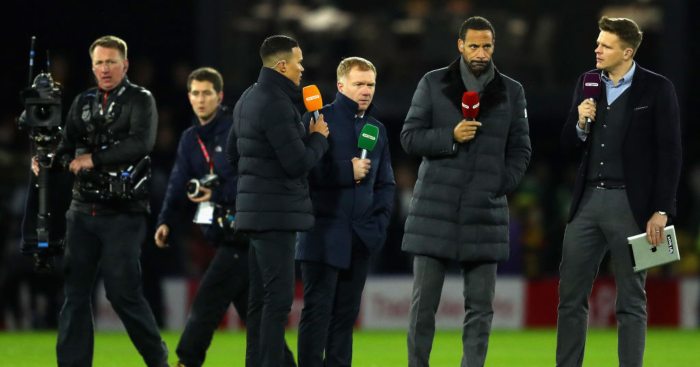 Rio Ferdinand and Paul Scholes thinks Man Utd will struggle to win the “top competitions” with their current defence.

The Red Devils have got off to the perfect start in their Champions League group with two victories in their opening two fixtures against Paris Saint-Germain and RB Leipzig.

A Marcus Rashford hat-trick off the substitutes bench helped Man Utd to a 5-0 victory over Leipzig on Wednesday evening with their attack overwhelming the Germans.

However, both Ferdinand and Scholes reckon they will still struggle to challenge for the trophy because of their defence.

“Yes, last season they had a good defensive record, but I just see moments in games where they get opened up, they get physically dominated at times, especially in terms of pace, especially if their protection isn’t what you’d expect it to be if the game opens up a little bit.

“If the game opens up and they’re on the halfway line and they’re playing one versus one or two versus two, then I fear for my life in that situation. If the team shape is fine and it’s all set up properly, then they look a decent pairing.”

And Scholes agreed with Ferdinand and claimed that the current set of defenders are only good enough if they are shielded by two midfielders.

“When they have the two [Fred and Scott McTominay] in front of them, they look different,” Scholes added.

“You’re a defender for a reason, you’re supposed to be OK one-on-one, sometimes it can take away the attacking side of the team which it has done in the last couple of games, especially against Chelsea on Saturday. Fred and McTominay have definitely made them look better players, and they’ll prefer that.”