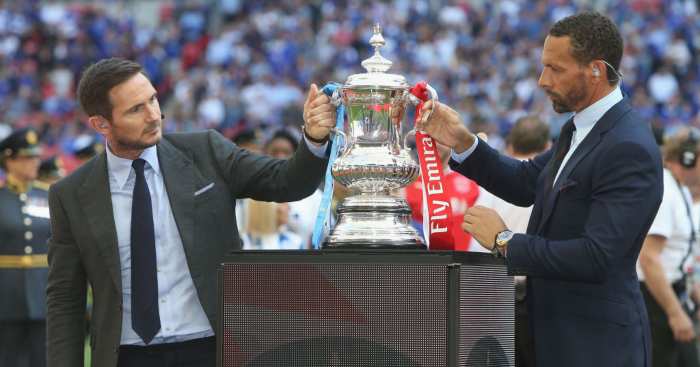 Sarri has been tipped to fill the vacant managerial role at Juventus with his Stamford Bridge future in doubt.

The former Napoli coach only took charge of the Blues last summer and secured the Europa League title, a third-place Premier League finish and reached the Carabao Cup final.

Despite that, he sometimes felt the wrath of fans for his approach and is now reportedly being lined up to succeed Massimiliano Allegri at Juventus.

Lampard, Chelsea’s record goalscorer and someone who won 11 major honours during a 13-year spell in west London, spent last season in charge of Sky Bet Championship side Derby.

He guided the club to the play-off final where the Rams lost to Aston Villa but has been heavily linked with a swift return to Chelsea.

“He has lowered the playing age at Derby – his remit before the season would have been around that.

“He hit all the nails on the head in that regard. But more than that the way Frank has conducted himself has been exemplary, especially in the situation with the Leeds manager (Marcelo Bielsa, during the ‘Spygate’ scandal), he handled that very well.

“He is the perfect choice. People talk about experience and what-not but what experience did Pep (Guardiola) have when he went into Barcelona’s first team? He trained the younger kids at the club.

“Frank knows the club and he knows the players and the players will respect him. You can see he can carry himself in a particular way in front of the media and in the football club and he can change things within a season.

“We have seen that at Derby. I know it’s a smaller club but we have seen him do it. I don’t think he would go in there and be phased by big personalities in that changing room.”

Chelsea have appealed to the Court of Arbitration for Sport to have a transfer ban overturned.

But the club have not asked for the two-year ban, imposed on the club by FIFA after allegations Chelsea broke regulations over signing young players, to be frozen.

That means they may not be able to bring in any new signings this summer, having already sold talisman Eden Hazard to Real Madrid.

If that proves to be the case, Ferdinand feels that only improves Lampard’s chances of landing the job.

“If Chelsea are going to get a ban transfer-wise I don’t think they can look anywhere but Frank if I’m honest.

“Because he and Jody (Morris, Derby assistant manager) they know all the kids from 16 upwards. They know what they can all do.

“(Do you) keep blowing money away with these managers who you have to pay up after two years? Or are you gonna go with someone who the fans are going to love to have back?

“Someone who the young players are going to say ‘oh my god, Frank is going to play us.’ At a time when managers are scared and under pressure not to play kids, I think it will be refreshing.”