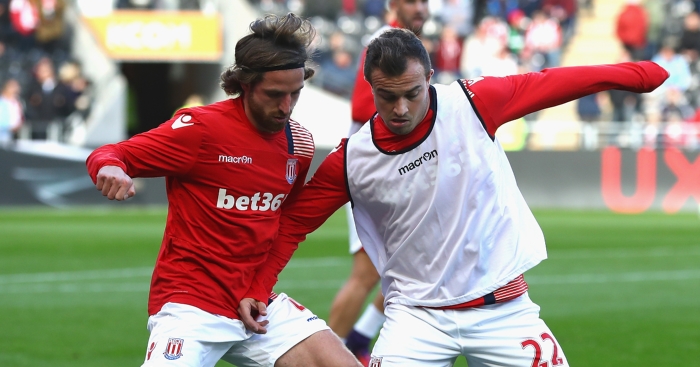 GOALKEEPER: Lukasz Fabianski
The common consensus is that Jack Butland is one of the best goalkeepers outside the top five – consider yourself scathed, Petr Cech – and he is undoubtedly low on the list of those to blame for Stoke’s demise. The Potters have conceded the joint-most goals of any side in the top flight this season, yet Butland was one of the few competent players who helped keep them afloat for so long.

Perhaps it is a question of age, nationality or a combination of the two, but Lukasz Fabianski has been overlooked as a result. The 33-year-old has the third-best save percentage (71.2%) of any Premier League goalkeeper this season, and it is no insult to take bronze on that podium behind David de Gea and Nick Pope. His team may have finished 18th, but he ranked fifth in our top ten goalkeepers of the season.

The tears on the final day when Swansea’s relegation was confirmed was the culmination of nine months’ worth of impeccable work with no reward. If The Guardian are to be believed, Watford, Newcastle, Crystal Palace and West Ham are all interested. Arsenal could do worse than rekindling an old romance.

RIGHT BACK: Craig Dawson
“I obviously didn’t fit into the style of play he wanted to play, he was playing centre halves as full backs,” said Cyrus Christie in February, reflecting on his “bizarre” time at Middlesbrough. “He has always liked these two-metre tall defenders and likes to play with four centre-backs,” noted an unhappy Cristian Gamboa at West Brom in 2015. “Pulis wants safety above all else,” said Sebastien Pocognoli a year later at the same club. “He has another pet subject and that is picking big central defenders to play as full-backs.”

All three were keen to air their dirty laundry in the most public arena possible, with Tony Pulis the common denominator. But the Welshman was simply trying to capture the same lightning in a bottle he did with Craig Dawson, Rochdale centre-half turned steady Premier League hand. At just 28, it seems inevitable that he will avoid a first season in the Championship since 2013.

Craig Dawson rising unmarked to meet an inswinging corner is one of the greatest feelings in life.

CENTRE-HALF: Ahmed Hegazi
Twelve months ago, Ahmed Hegazi was a 26-year-old centre-half who had failed to ever impress outside of his native Egypt. A three-year spell in Fiorentina garnered as many league appearances, and while a brief time on loan with Perugia brought more first-team opportunities, his breakthrough was not forthcoming. The ‘Nesta of the Pyramids’ seemed destined to never emerge from the confines of his home country.

West Brom offered a lifeline, and Hegazi has grasped it despite the club’s relegation. There is a reason Liverpool were interested before the Baggies made the move permanent in December. It is unlikely to be the last we have seen of his towering headers, no-nonsense style and sh*thouse rib punches.

CENTRE-HALF: Alfie Mawson
To underline Swansea’s plight, this is not a squad blessed with sizeable assets they can sell this summer. A lacklustre defence, a lightweight midfield and a haphazard strikeforce doth not a successful Premier League campaign make. The vultures will only circle for a matter of moments before deciding that this carcass is hardly worth picking at.

Alfie Mawson is the exception, the one player for whom Swansea could quote an eight-figure fee without subsequently bursting into laughter. The 24-year-old has taken to the top flight in impressive fashion, and is unfortunate to be tarred with the brush of relegation. Swansea are unlikely to be able to keep hold of him.

LEFT-BACK: Kieran Gibbs
West Brom’s defence was not the reason for their relegation. Only three clubs outside the Premier League’s top seven conceded fewer goals than their 56 this season, while Ben Foster kept as many clean sheets (10) as Jordan Pickford, Mat Ryan and Jonas Lossl. Salomon Rondon and Jay Rodriguez are the only players to have scored more than two league goals, and their struggles at that end of the pitch have brought about their demise. By Kieran Gibbs’ own admission, West Brom “haven’t been good enough” this season, but the 28-year-old has fared better than most.

RIGHT WING: Xherdan Shaqiri
Stoke would have been doomed long ago without him. No player scored more goals (8), provided more assists (7) or had more shots (69) for the Potters this season, while he created 46 more chances than any of his teammates. “The feeling that even a Ronaldinho could do little in this team is sobering,” said the winger in March, lamenting that “there is a lack of quality around me”. It really is difficult not to sympathise – although a reported £12million release clause is something of a consolation. The only player to have ever played in the Premier League and scored a hat-trick at the World Cup will be sticking around.

CENTRAL MIDFIELD: Joe Allen
Stoke might have inserted a relatively low release clause in Shaqiri’s contract, but they made no such mistake with Joe Allen. If reports from last week are to be believed, the Welshman is available for £25m to clubs dining at the top table. Unless you are Liverpool.

Allen will not be short of suitors at either end of the division. He has only just turned 28, has proven himself an accomplished midfielder, and is unscathed from Stoke’s seasonal surrender. Plus he will be absolutely guaranteed a move as soon as Brendan Rodgers ends his self-imposed Premier League exile.

CENTRAL MIDFIELD: Badou Ndiaye
While Jack Butland was perfectly justified in lambasting Stoke’s “farcical” and damaging recruitment in recent years, this winter proved to be a qualified success. The arrivals of Moritz Bauer and Badou Ndiaye – as well as Konstantinos Stafylidis – were too little, too late, but provided rare positives in an otherwise bleak campaign.

Stafylidis will return to parent club Augsburg this summer, while Bauer has committed his future to the club. But Ndiaye will surely move on to bigger and better things. He has been quietly impressive in the heart of the midfield, and has already attracted interest from elsewhere.

Stoke fans will mourn the inevitable loss of the 28-year-old, but they must always remember one thing: Ndiaye will always love you.

LEFT WING: Jay Rodriguez
Like Sergio Aguero, Robin van Persie, Eden Hazard and Michy Batshuayi before him, Jay Rodriguez revelled in his role of Premier League title decider this season. His goal against Manchester United officially crowned Manchester City as champions in April, and was a temporary boost in what has been a difficult year on both a personal and a professional level. Five goals for Southampton last season has become seven for West Brom this for a player whose last two Championship campaigns have garnered a combined 29 strikes.

STRIKER: Jordan Ayew
Some of us are good at sports, others are particularly good with numbers, while only a precious few can recite the lyrics to any Blue song ever recorded. It took 26 years of self-discovery and reflection, but Jordan Ayew has finally found his calling in life. After top-scoring for relegated Aston Villa with seven league goals in 2015/16, he finishes as top scorer for relegated Swansea with seven league goals in 2017/18. Ayew, taking the piss.

STRIKER: Salomon Rondon
A model of consistency during his time at West Brom, Salomon Rondon has played between 38 and 40 games and scored between eight and ten goals in each of his three seasons. It sounds like an underwhelming total, but he has scored at least 17 more goals than any other Baggie in that period. The Venezuelan is now so synonymous with the role of battering ram striker that he has become central to Jurgen Klopp team talks.