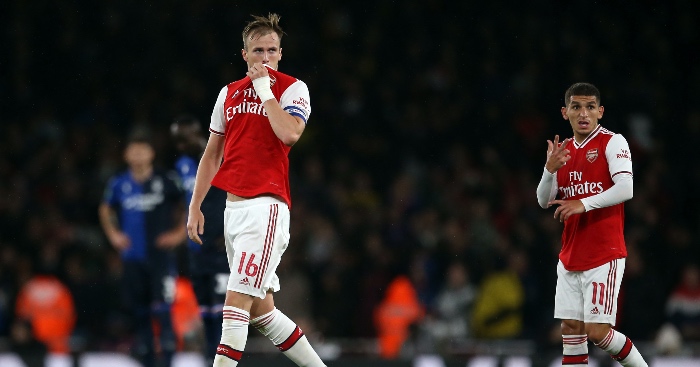 Rob Holding has reportedly signed a new long term contract with Arsenal, ending speculation of a transfer away from the Emirates.

The defender was linked with a loan move to Newcastle United last summer during his search for game time.

But manager Mikel Arteta has since put his faith in Holding, giving him 14 Premier League appearances this season.

According to The Athletic, Arsenal have now rewarded Holding for his performances with a new long term deal.

The report doesn’t state how long the contract is, although it is an extension on his previous deal which was set to expire in 2023.

The contract will see Holding remain at the Emirates Stadium for the next few seasons as his squad importance continues to grow.

It’s thought that Arteta sees him as a future leader alongside either Gabriel Magalhaes or Pablo Mari in defence.

The 25-year-old is nearing 100 appearances for the Gunners after making the switch from Bolton in 2016.

He last signed a new deal in May 2018, which was set to run for five years.

Arteta may see Holding as David Luiz’s long term successor at centre back.

Holding has been an important part of their upturn in form recently. He’s helped them to clean sheets against the likes of Brighton and West Brom.

He also played the full match against Chelsea in late December, which Arsenal won 3-1.

After the arrival of Mari from Flamengo and William Saliba from St Etienne, it was thought that Holding’s time in North London could be coming to an end.

Arteta now seems to view him as an integral defender going forward, as demonstrated by the new contract and his increased playing time.

His situation is boosted by the loan of Saliba back to France. The youngster has joined OGC Nice after failing to make a competitive appearance for Arsenal this campaign.