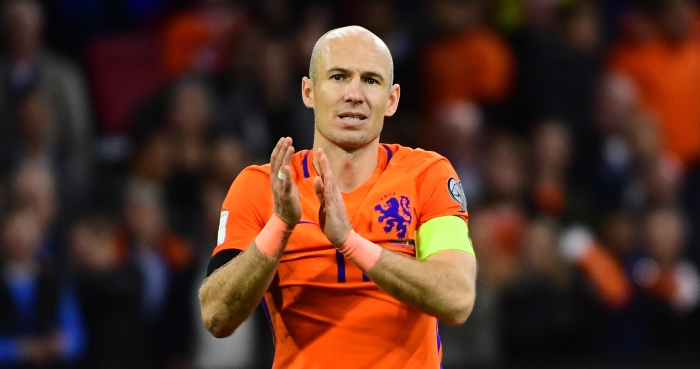 The KNVB announced that the 33-year-old Bayern Munich winger, who has played 96 times for his country, was calling time on his Holland career shortly after Tuesday’s home match against Sweden.

The Dutch won the World Cup qualifier 2-0 with Robben scoring twice, but it was not enough for them to secure a place in the play-offs for the finals in Russia next summer as they finished third in Group A.

The brace on Tuesday made it 37 international goals for a man who played at six major tournaments for Holland after making his Oranje debut in 2003.

He helped them reach the World Cup final in 2010, which they lost to Spain, and come third at the 2014 tournament.

Robben, who has had plenty of injury problems over the years, was quoted by vi.nl as saying: “The man of glass has lasted the longest.”

He added: “I’ve been thinking about it (international retirement) for a long time.

“I have already considered it for a while, but then I went on. I wanted to finish this qualification.

“I’m 33 years old now. I’m playing at a top club in Europe and I want to concentrate on it now. It’s also a good time to hand over the baton.

“I still feel very good and want to be at the top as long as possible.

“I am very proud and honoured at my six tournaments.

“The most beautiful moments for me were the World Cups of 2010 and 2014, in which we were really a close team and a close group. But there are many beautiful moments, fourteen years is a long time.”

As the news emerged, a post appeared on Bayern’s official Twitter that featured a picture of Robben, accompanied by the word “legend”.

Meanwhile, a message on the official FIFA World Cup Twitter said: “A Dutch legend bows out. Congratulations on an outstanding international career, @ArjenRobben”.