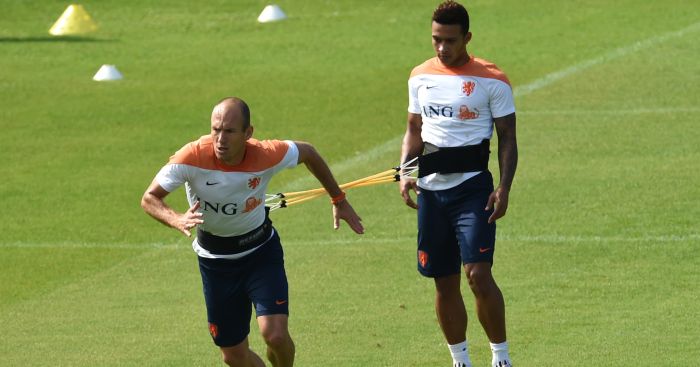 The 2015 summer signing from PSV Eindhoven has proved a major disappointment at Old Trafford, with the £25m Holland star dropping out of favour under Louis van Gaal last season and only making one competitive start under Mourinho – against Northampton in the EFL Cup – this season.

He hasn’t made a single Premier League start this term under Mourinho and looks destined to move on next month with Everton, AC Milan and Fenerbahce rumoured to be interested in the 22-year-old.

“He’s a very talented player,” Robben told Goal. “It’s a shame that it hasn’t worked out for him yet at Manchester United.

“He hardly ever plays and I expect something to happen shortly. Perhaps he’ll move as early as the winter break.”

Back in August Mourinho lamented on having to leave players like Memphis in the stands because of the depth of his squad, but claimed the player would see more game time later in the season.

“I have so many good players,” Mourinho said. “I arrive in the dressing room after the match and I was happy but then I become sad, because I arrive there and all the other guys are there in their nice Paul Smith suit but not a tracksuit, not even playing, not even being on the bench.

“So when I look to Memphis, Carrick, Jones, all these guys I don’t select. I am desperate for September. Because September we have Capital One Cup, we have Europa League, we have seven matches in September and they all play and then I am happy.”

For fans of anyone else, here is the other Mailbox. Has Jose Mourinho lucked out and landed on a winning formula? https://t.co/aJ4FP5i9ax

Memphis played a total of 87 minutes in September and was hooked on 55 minutes in his only start of the season – the 3-1 away win at Northampton – thus suggesting that his time at Old Trafford is up.

Memphis would be a good fit at Goodison and may well be open to joining fellow Dutchman Ronald Koeman as he looks to replace long-term injury to Yannick Bolasie.