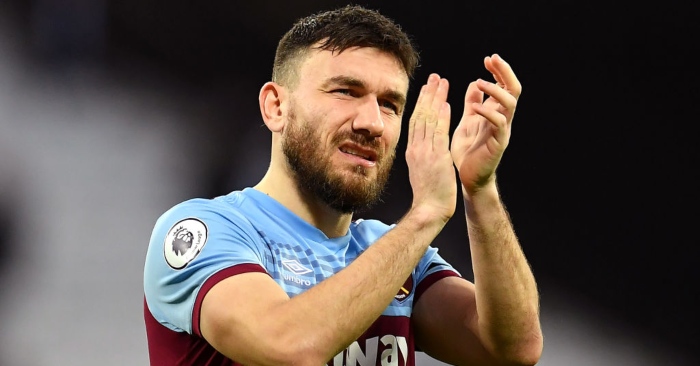 Our Old Folks XI senior winger has bounced around a bit, having played for two clubs in Scotland and five in England. He’s bounced up and down, too, with three relegations and two promotions, including a victorious Wembley final. He’s even dipped his toe into Europe, with two matches in Europa League qualifying to his credit. Wherever he’s been, he’s put the ball in the net, with a strike rate of 109 goals in 479 appearances in all competitions. He’s done similarly well for his country, with seven goals in 28 matches. If we’re allowed to say a British player has a cultured left foot, his can do the complete works of Shakespeare. Friends, Romans, countrymen, it’s…

Robert Snodgrass is one of the unlikeliest members of our XI. There are three reasons why he shouldn’t be a Premier League winger in 2020: 1) he’s too old; 2) he’s too slow; 3) he’s too old and slow. Throw in the fact that he once missed about a season and a half with a serious knee injury, and you’d be forgiven for thinking it’s about time to take his coaching badges.

In fact, his emergence at West Ham United has been one of the great surprise stories of recent years. He signed from Hull City in January of 2017, but failed to impress, and the next season was sent on loan to Aston Villa in the Championship. He had an excellent season at Villa Park, with seven goals and 14 assists, and the club just fell short of promotion, falling in the play-off final against Fulham.

And that was the problem. Snodgrass badly wanted to stay with Villa, but the promotion failure dropped the club into major financial problems, so they couldn’t sign him. It was back to West Ham for 2018-19, but with Manuel Pellegrini now in charge and the owners finally spending big, there seemed even less chance of success. When he didn’t even make the squad in the first two matches, and by mid-October had played more than 45 minutes only twice, it seemed as if his Premier League career had stalled for good.

Then Andriy Yarmolenko got injured, and Snodgrass was suddenly essential. He wound up with 25 league starts, some on the wing and some in attacking midfield. In the summer West Ham extended his contract to 2021, with an option for a further year. Pellegrini, not one for effusiveness, offered high praise for his character and positive influence on the dressing room.

Inevitably, though, in August the process began again: only one start in the first nine matches. But with West Ham fading after a decent start, he was given a chance against Sheffield United – and scored. Then he scored the next match against Newcastle. And suddenly he was a regular again, and for the most part remains so under David Moyes.

While Premier League fans will know Snodgrass from his time at Norwich City, Hull City, and West Ham, the club where he spent his formative years was Leeds United. After moving in 2007-08 from Livingston in his native Scotland, he played four full seasons for the Whites, and his 200 appearances in all competitions is more than twice the number he’s logged at any other club. Here’s an excellent compilation video from his time at Elland Road, with a little bit of Livingston thrown in:

In his second year at Leeds, Snodgrass made the PFA League One Team of the Year, and the club was promoted to the Championship. And when in 2011-12 he bagged 13 goals and 15 assists, and won both the supporters’ and players’ Player of the Year award, it was clear he’d be heading for the Premier League.

In his early years in Scotland that would have seemed quite unlikely. A highly touted teenager, he had a noted discipline problem, with alcohol his most prominent vice. At the age of 18, in his first year as a regular, not only were Livingston relegated, but they won only four of 38 matches, with a record low points total. The following year Snodgrass was even loaned out to third-tier Stirling Albion.

But it was at Albion where he reversed course for good. The Binos faced Airdrie in the two-leg promotion final: after playing poorly in the home first-leg draw, Snodgrass struck twice in the first 17 minutes at Airdrie to give his side a solid lead on aggregate. Albion held on to win 3-2 and were promoted to the second tier. A year later Snodgrass was off to Leeds.

Since arriving in the Premier League he’s been a yo-yo player. Norwich City – relegated in his second season, but supporters’ Player of the Year. Hull City – relegated the season he missed with injury, promoted via playoffs the season he returned. West Ham – loaned to Villa in the Championship, fingers crossed for this season.

But there’s never been any doubt about his left peg, one of the most stylish in the business. Since coming to England he’s notched 92 assists. And although I can’t find complete stats for his time in Scotland, I have him with at least 12 career free-kick goals, seven of which were decisive for the result. Here’s a stoppage-time winner for Hull City vs. Wolves in 2016, with appropriate commentary:

For good measure, here’s a very similar strike against Everton the following season:

Still, not all set-piece situations let you go for goal. A few weeks ago at Bramall Lane, West Ham were trailing Sheffield United 1-0, when Snodgrass, on the bench for once, came on in the 69th minute. Match reports will tell you his late, late equaliser was chalked off by VAR. But they won’t tell you that that evening he delivered one of the finest dead-ball exhibitions the Premier League has ever seen.

With his team needing a goal to equalise, on three consecutive free kicks Snodgrass merely put the ball exactly in the right spot for striker Sébastien Haller. On the first Haller scored, but was offside; on the second he was too well marked; on the third he missed a fantastic chance. So it all went for naught, except in the memories of the few who were privileged to see it.

Given the talent pool north of the border, it’s a surprise Snodgrass hasn’t had more caps for Scotland. (Any Scottish fans who have particular insight into his international career, please contribute in the comments.) As a youth player his side reached the final of the U-19 Euros in 2006. But his knee cost him the Euro 2016 qualifiers, and although he opened the 2018 WCQ with a hat trick at Malta, by the finish he was mostly on the bench. He was largely ignored in the most recent Euro qualifiers. Still, he was named the SFWA International Player of the Year in both 2014 and 2017, the only one ever to receive the honour twice.

This season, very quietly, he’s become one of West Ham’s most productive players. A recent brace against Brighton gave him five goals for the season, only one behind top scorer Haller. His four assists, three from set-pieces, ties him with Felipe Anderson for the team lead. Moyes has been quoted as saying “there will be games where we can’t play him all the time”, but can he afford to leave out one of his best attackers, particularly when set pieces could make the difference?

The Hammers could do worse than rely on Snodgrass down the stretch. He’s an old hand at the business end of the season. The last time he was in a relegation fight, back in 2013-14, Norwich City went down, scoring only six goals in their last nine matches – but Snodgrass scored three of them. West Ham will need a lot more than that to survive, but if you ask me, keeping that slow 32-year-old winger in the line-up looks very much like the right move. Or, perhaps we should say, the left.