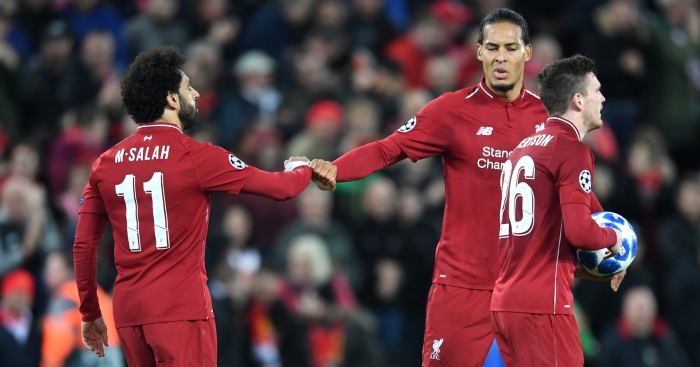 Liverpool defender Andy Robertson‘s admission that playing alongside Virgil Van Dijk makes his job easier is evidence enough of why the Dutchman is the favourite to be crowned player of the year.

The world’s most expensive defender arguably leads the race for the accolade ahead of Manchester City trio Sergio Aguero, Raheem Sterling and David Silva and his own 20-goal team-mate Mohamed Salah.

Since the Professional Footballers’ Association brought in its awards in 1974 a defender has won the main prize only five times, with John Terry the last to do so 14 years ago.

But Van Dijk has been the key component in Liverpool’s title challenge, helping the Reds keep a league-leading 16 clean sheets this season, and Robertson offered some insight into why.

“If the season ended tonight, I would give him it personally,” said the Scotland captain of the most important player in the title run-in.

“There’s still 10 games to go and somebody can step up from another team but Virgil can take it to a whole new level, I reckon.

“The attacking players are usually in the running because they take all the goals and the headlines but this season Virgil has been fantastic and he’s getting all the plaudits that he deserved.

“He’s so consistent as well. If he puts the performances as he has done, there’s no reason why he shouldn’t have that trophy.

“He makes my life easier, that’s for sure. To have him next to me it makes everything so much easier.

“When somebody is running at you and you know Virgil is inside – he’s rarely out of position, if ever.

“For me, he’s the best centre-back just now in the world. That’s the way he’s playing and the confidence he’s got – and he’s still young enough that he can get even better.”