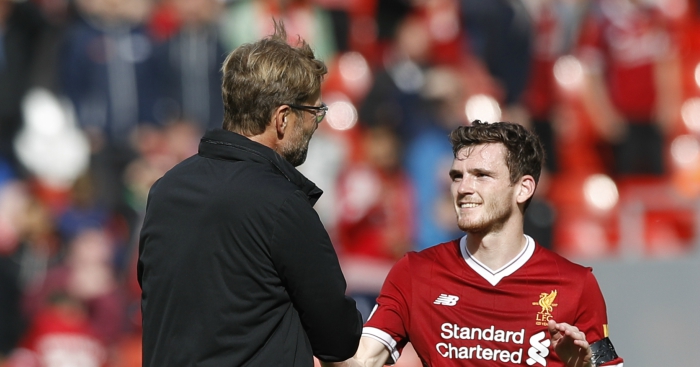 Andrew Robertson has moved to clear up concerns over his standing at Liverpool.

Robertson joined the Reds for around £8million from Hull in the summer, but has rarely featured.

The Scot has started just two Premier League games, but was not even in the matchday squad for the other six.

He has yet to play in the Champions League either, being on the bench in one of two games thus far.

The 23-year-old was once more omitted for the 0-0 draw against Manchester United – READ 16 CONCLUSIONS NOW – and has explained his absence.

“For me and Moreno, if we start, great; if we don’t, realistically we will be in the stand or not travelling,” he told BBC Scotland.

“We have attacking people on the bench who can come on and change the game, which we usually need.”

He added, in praise of his left-back rival: “James Milner had played left-back all last season and a lot people on the outside probably thought Moreno was finished at Liverpool, but he has worked really hard in training to get everything right. He has played well since he has been in there.

“It has been frustrating for me because my signing has probably lifted him but I believe that it has given Liverpool two good left-backs.”