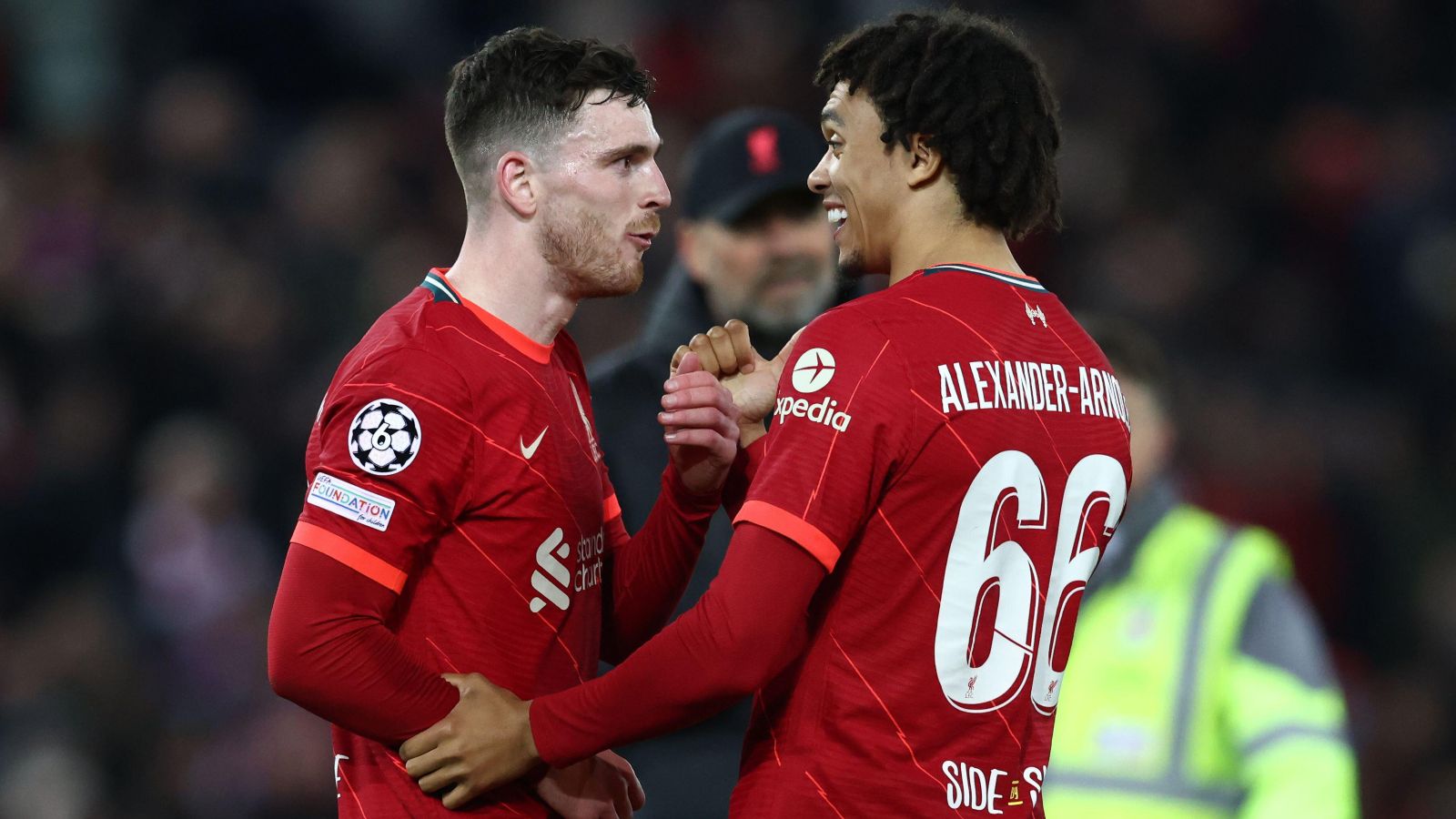 Andy Robertson admits he has taken his friendly rivalry with Liverpool team-mate Trent Alexander-Arnold to a new level after Gary Neville labelled the Scotland captain “the best full-back in the league by a mile”.

The Sky Sports pundit was assessing the quality of the Premier League’s wide defenders last week when he said Liverpool’s left-back ranked top among them all.

Conversely, Alexander-Arnold has been the one receiving most of the plaudits this season as his 12 Premier League assists, in addition to two goals, was second only to team-mate Mohamed Salah.

So in the build-up to the Champions League final, Robertson has taken great delight in getting one over his colleague in a good-natured way.

“Yeah, he’s not too happy,” said the Scotland international of Alexander-Arnold.

“He gets enough praise probably. I’ve used it with Trent for the last week, by saying ‘By a mile’ and things like that.

“I just keep saying it to him. I walk past and that’s all I need to say. He knows exactly what I’m talking about because I know he watched it. That’s the relationship me and him have.

“It is somebody (Neville) who played for Manchester United but, for me, he was one of the best full-backs in the Premier League and to have someone like that saying that kind of took me back a bit.

“Obviously that kind of praise is always nice. I don’t necessarily need it but when you do hear it from somebody so well thought of in the game, it was very good words and I enjoyed hearing it from him.

“Trent’s stats are always better than mine so I try and keep him away from stats.

“Unfortunately he always knows the stats inside out but stats are part of football, it is great.”

While Saturday’s final is a rematch of the 2018 encounter in Kiev won by Real Madrid, the history between the two goes further back and a final in Paris brings back good memories for Liverpool.

In 1981 the pair met at the Parc des Princes where left-back Alan Kennedy was the unlikely match-winner in a 1-0 victory as the Reds collected their third European Cup in five seasons.

This will be a third final in five years for Jurgen Klopp’s side, having won in 2019, but Robertson has not had any thoughts about reprising the Kennedy role.

Taking Ol’ Big Ears back to Liverpool for the third time 😍

Alan Kennedy’s goal won it for us in Paris against Real Madrid in 1981! #UCLfinal pic.twitter.com/myHTFjDmOD

“As soon as we got to the final, there were a lot of people who sent me this (video) or said they were going to bet 1-0 Liverpool and me scoring,” he added.

“I don’t think I have come across him (Kennedy). Maybe one day I will and we can talk about that goal and how he did it.

“Obviously I cannot change history; he scored a wonderful goal that managed to win Liverpool the Champions League, if I do that, I do that. But I am more focused on trying to put in a good performance, trying to be solid defensively.

“If we get a good basis then I will let someone else try and be the hero. That for me is the most important thing.”

It is almost 10 years since Robertson sent his now famous tweet “Life at this age is rubbish with no money #needajob” as an 18-year-old having graduated from Queen’s Park’s academy.

life at this age is rubbish with no money #needajob

He plays that down now but insists there is still plenty of improvement to come.

“I think anywhere I have been, every club I have always tried to learn,” he said.

“I have never ever thought ‘I am the finished article, this is me now, this is as good as I am going to get’.

“Whether my best days have been and gone or whether they are still to come, I don’t know but what I do know is every day I try to improve.

“Probably I am my worst critic, to be honest, and that sometimes is my downfall in terms of certain games or certain things happening, I beat myself up probably more than I maybe should and maybe should have a better perspective on it.

“But I can’t change that and I try make that work for me instead of not work for me because if I am harsh on myself then I can drive myself on.”