Home All The News Robertson: No nerves are showing it’s just a ‘wee blip’ 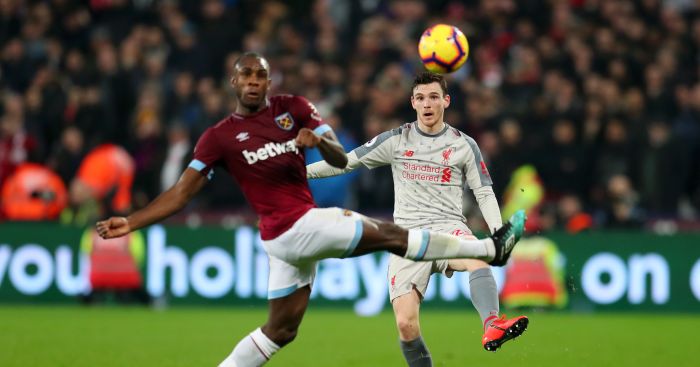 Andy Robertson has dismissed any notion that Liverpool’s “nerves are showing” in the race for the Premier League title.

The Reds put in a poor performance as they were lucky to come away from the London Stadium on Monday night with a point against West Ham.

Jurgen Klopp’s men have now dropped seven points from their last five matches and have given City the opportunity to leapfrog them on Wednesday night when they play Everton at Goodison Park.

However, the Reds are still three points clear in the Premier League table and Robertson doesn’t think nerves are showing.

“I wouldn’t say nerves are showing,” Robertson told Sky Sports. “Did anyone say that when City dropped points against (Crystal) Palace and Leicester (in December)? I don’t think they did.

“It’s no different for us – people talk about pressure because we’ve not been in this position, but it’s February.

“Everyone needs to relax and try and enjoy the run-in – many other clubs want to be in the position we’re in just now. Nerves aren’t showing in the changing room. It’s been two poor results and poor performances, it happens during a long season. We need to get back to playing the better football we can, but it’s nothing to do with nerves.

“We’re having a wee blip and we need to just try and get over the line in a couple of games. The run-in will be exciting, but it’s time to try and enjoy it.

“We’d prefer to have a fully-fit squad. City dropped points when they had (Kevin) De Bruyne and Fernandinho missing, then they all came back and they’re in a good moment just now.

“We’ve got quite a few injuries and we need to try and get the boys back fit, but we’ve recruited and have a big enough squad that we should be able to deal with it.”