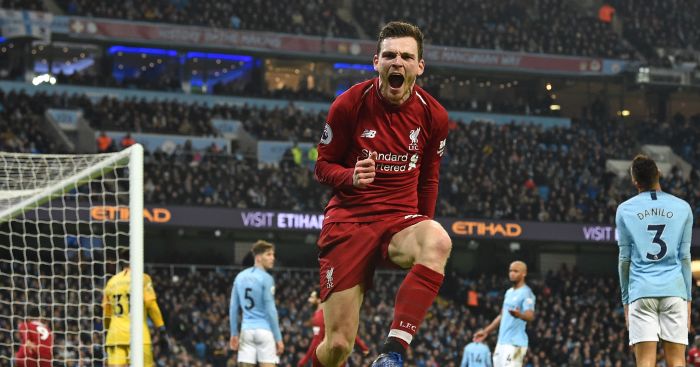 Liverpool defender Andy Robertson wants to follow his new five-year contract with trophies after admitting extending his stay at the club was a “no-brainer”.

And, after following the example of Mohamed Salah, Sadio Mane, Roberto Firmino and Joe Gomez, who have all signed new contracts in the last six months, Robertson now wants to bring silverware to Anfield, with the Reds currently top of the Premier League by four points and in the last 16 of the Champions League.

“I hope to achieve success as a team over the course of this new deal,” he told liverpoolfc.com

“This club demands trophies and too long has probably passed without trophies.

“So I hope to help bring another couple of trophies to this club and help push in that direction because the fans demand it and the club demands it, so that’s what we aim to give.

“We came close (reaching the Europa League and League Cup finals in 2016 and Champions League final last year) but it’s about taking that next step and hopefully getting a winner’s medal around your neck, whatever competition it is.

“That is the main aim for us.

“As soon as the club came to me, it was a no-brainer for me – I want to stay here, so as soon as they put an offer on the table it was signed as quickly as that.

“It was a pretty easy contract for me and I’m sure for the club as well. We both agreed very quickly, that’s why it’s been done so quickly.”

Robertson had a slow start to his Liverpool career, with manager Jurgen Klopp giving the 24-year-old time to adapt to a new way of working.

However, since establishing himself as the regular left-back in December 2017 the Scot is now one of the first names on the team sheet after a string of impressive performances.

In what turned out to be Jose Mourinho’s last match as Manchester United manager, the 3-1 defeat at Anfield, the Portuguese made a point of singling out the defender.

“I am still tired just looking at Robertson. He makes 100-metre sprints every minute, absolutely incredible,” he said in his post-match press conference.

Robertson, however, believes he has plenty more to give.

“I am still young enough at 24 that I hope my best is still to come, that I can get better at the things that maybe are a small weakness or whatever,” he added.

“It’s about improving on them every day and the things you think are strengths, to try to get better at.

“I feel as if I have done that – this season I have already got more assists than last season, which is massive for me because I wanted to give more in attack and make my final ball a bit better.

“This season I feel it has been better, but it can still improve. As a defence we’ve improved and of course, defensively, I feel as if I have improved under that.

“I am happy with that side of the game as well, getting better and better and I hope there is still a lot more to come.”

Klopp is delighted to have wrapped up a deal so quickly.

“I think of all the contract renewals I have been involved with, this one was done in almost record time,” he said.

“He might be from Glasgow originally, but everything about him screams Liverpool.

“It has been fantastic to see him grow, develop and improve.

“Everyone knows about his personality, on and off the pitch, but maybe we are guilty at times of overlooking his quality.”