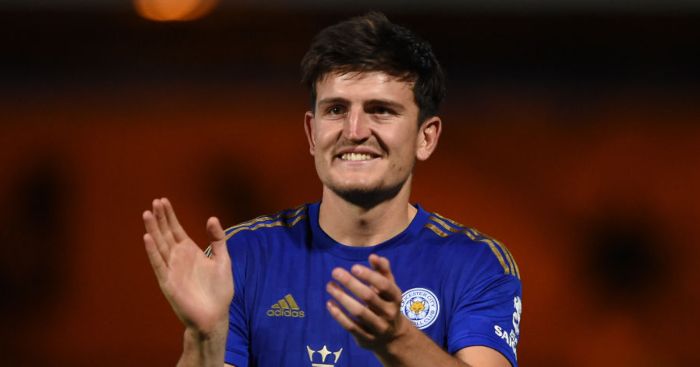 Brendan Rodgers and Ole Gunnar Solskjaer have reacted to the news that Manchester United have agreed a fee with Leicester for England centre-back Harry Maguire, although the Red Devils boss remained coy.

United will pay £80million for the 26-year-old, with the deal subject to a medical and personal terms, though with Maguire keen to make the step up the latter should prove no obstacle.

Solskjaer declined to comment on the Maguire deal during an interview ahead of the International Champions Cup game with Milan in Cardiff on Saturday.

But the United boss told PA: “We still hope one or two deals can be done. We’ve been working on cases for a long time and suddenly the deal can be done when it’s dragging on.

“As a club we’ve had targets, but as a coach and manager when you go out on the pitch you have to work with the ones you have.

“The reality is you have to work with the ones that are there. I’ve never been thinking ‘I’ll play him there but he’s coming in’.

“Everyone who has been in pre-season has a big part to play and most of them have impressed.

“But it (transfer speculation) doesn’t stop (after the deadline) because you still have to plan for the next transfer window and next summer.”

The Maguire deal represents success for both parties, with United getting a ball-playing defender who offers the ideal mix of both experience and relative youth, while Leicester’s strategy of holding their ground over their valuation of the player has paid off.

The Foxes will receive a world-record fee for a defender, eclipsing the £75m Liverpool paid Southampton for Virgil Van Dijk in January 2018.

Leicester boss Rodgers admitted the deal, assuming it goes through, is an “incredible” piece of business for the club.

“He’s a special player, he’s not a player we would want to lose,” Rodgers told Sky Sports News.

“It’s something we’ll see over the weekend. If there’s anything more to say on it, we’ll do that after the weekend. But at this moment, the clubs have agreed (a fee) and there’s still some work before it goes through.

“I think it’s an incredible piece of business really, but if you look at the market as well, the market changes each year.

“He’s a top-class player, he’s a good man as well. This is a guy who knows there has been interest over the summer and he’s been super professional.”

United had made strengthening the centre of their defence a priority at the start of the summer, with the need only becoming more acute when Eric Bailly suffered a knee injury during their pre-season tour of China which is expected to keep him out for at least four months.

However, Maguire’s arrival will almost certainly lead to a clear-out at Old Trafford, where there are already six defenders – Bailly, Victor Lindelof, Phil Jones, Chris Smalling, Marcos Rojo and Axel Tuanzebe – in the senior squad.

The deal more than doubles United’s outlay this summer so far. Aaron Wan-Bissaka cost an initial £45m from Crystal Palace while Daniel James signed from Swansea for £18m.