Home F365 Says Rodgers and Leicester: The start of something special? 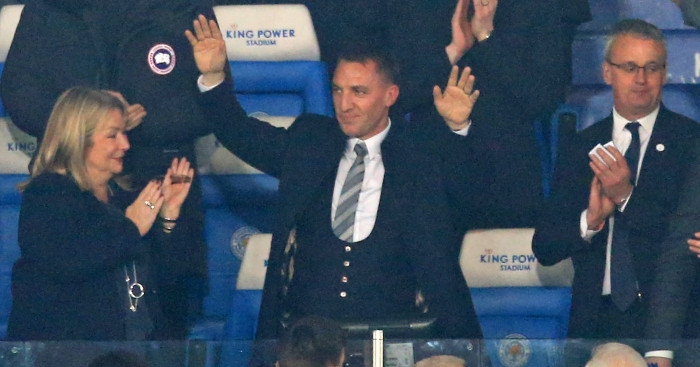 As 22-year-old James Maddison and 21-year-old Harvey Barnes combined to regain possession, 22-year-old Wilfred Ndidi found 21-year-old Youri Tielemans just inside the Brighton half. The midfielder carried the ball 20 yards or so before playing in 22-year-old Demarai Gray to score.

It was a goal born of intelligence and ingenuity, of exuberance and simplicity. The teamwork to win the ball back meshed beautifully with the individualism of the inch-perfect pass and the confident finish. Leicester’s pupils, as they so often do, had excelled in their first exam without their old teacher.

The common denominator was youth. If that is to be Claude Puel’s legacy, the Frenchman should hold his head high. He was never a particularly popular appointment but his record in prioritising and developing emerging talents deserves acclaim. Eight of the starting XI Mike Stowell named on Tuesday were aged 25 or under, with Kasper Schmeichel (32), Jamie Vardy (32) and Jonny Evans (31) the designated drivers towards a first victory in nine games.

But this was unlike any typical goal scored under Puel’s watch. Wherever he has sought solace since his sacking, he will have been reaching for the remote control to slow everything down to a plodding pace. For the first time in what feels like a long time at the King Power Stadium, speed of play matched speed of thought to devastating effect.

The Foxes spluttered and stalled thereafter, labouring to a 2-1 victory at home to a free-falling Brighton side. But Brendan Rodgers will have seen enough from the stands to affirm his decision to bring a cryogenically frozen Premier League career back to life.

One month into his last spell in England’s top flight, the Northern Irishman predicted “a wee bit of pain short-term” before “the longer term gain”. Liverpool had opened their 2012/13 season with a three-game winless run which would extend to five before Rodgers could finally celebrate his maiden Premier League victory, but he never waivered from his course.

“I believe a young player will run through a barbed wire fence for you,” he continued, providing context in a way only he can to what had been a summer of great upheaval and difficulty.

“An older player looks for a hole in the fence, he’ll try and get his way through it some way, but the young player will fight for you.”

Rodgers sold or released eight players that season. Perhaps he feared that Craig Bellamy (33), Doni (33), Fabio Aurelio (32), Dirk Kuyt (31), Joe Cole (31) and Maxi Rodriguez (31) would scramble for the hole in the Melwood fence.

That hindsight shows only one of those transfers as an unqualified success rather neatly sums up where it went wrong for Rodgers at Anfield. But he was never going to lose sight of his vision or courage in his convictions.

Liverpool did not name a single one of the 50 youngest starting XIs as they finished eighth in the 2011/12 Premier League season. In their first campaign in the top flight, Rodgers’ Swansea accounted for 11, beaten only by Arsenal (17).

The following season saw seventh-placed Liverpool name six of the 50 youngest starting XIs, while Aston Villa named 32, Southampton eight and Swansea zero. Rodgers had overseen a drastic role reversal while simultaneously staying true to his own beliefs and improving his new club’s fortunes.

It is precisely why a squad containing Maddison, Barnes, Ndidi, Tielemans, Gray, Ben Chilwell (22), Caglar Soyuncu (22), Kelechi Iheanacho (22), Filip Benkovic (21) and Hamza Choudhury (21) feels tailor-made for a self-styled manager of future generations. Rodgers will favour them just as Puel did, but with the energy, vigour and passion that has long been lacking.

This is also a squad designed to counter-attack, which is why some of the doubts over Rodgers’ suitability extend beyond his public image. Part of the package with the Northern Irishman is that he will impose his own possession-based style, and that hardly worked for Puel. Yet beyond the veneer(s) of the motivational-speaking, sport-reinventing revolutionary is a pragmatic, adaptive coach. Liverpool passed the ball well and often thrived in possession, but were at their most scintillating under Rodgers as a counter-attacking force led by Luis Suarez, Sturridge and a young Raheem Sterling.

Leicester need an identity, they have to evolve from the side that thrilled on its way to an unprecedented and unrepeatable title almost three years ago. None of Rodgers’ former clubs will speak particularly fondly of him, but few would deny he left them in a considerably better place than when he found them.