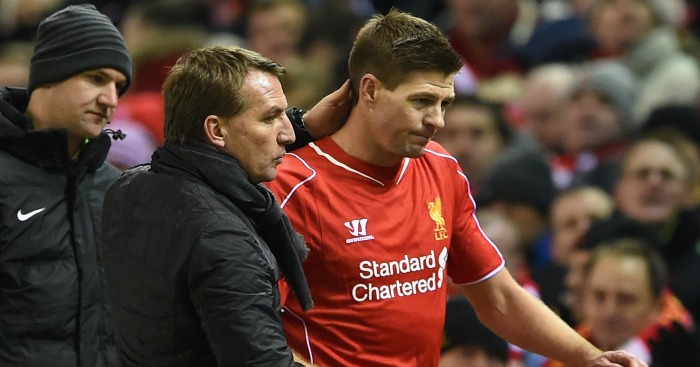 Brendan Rodgers has denied Steven Gerrard’s claims that he was “over-confident” in Liverpool’s push for the title in 2013/14.

Gerrard told The Guardian that Rodgers’ approach to the Chelsea game in 2013/14 – the 2-0 defeat that lost them the title – played into their opponents hands.

Gerrard told : “I’ve never been able to say this in public before but I was seriously concerned that we thought we could blow Chelsea away.

“I sensed an over-confidence in Brendan’s team talks. We played into Chelsea’s hands. I feared it then and I know it now.”

Rodgers returns to Anfield on Saturday for the first time since his Liverpool exit in 2015 and said that he “doesn’t lose sleep” over the Reds narrowly missing out on the title and denies Gerrard’s claims.

He told The Telegraph: “I have heard the other one about us being overconfident. When you look at it before that game I did and said nothing different.

“We had won 11 games on the spin going into that game, making a quick start and playing attacking football. That was what put us in that position, including beating Manchester City at Anfield.

“We could not have played any other way and I have no regrets about sticking to that. Of 14 games at the end of that season we won 12.

“You know, when you watch it back we played well in the game for 70 minutes, Chelsea doing nothing. Then we lost a goal in very unfortunate circumstances before half-time.

“Even at the start of the second half we were doing okay. The only thing I would accept is maybe a more experienced team would have been calmer in the last 20 minutes chasing the equaliser.

“We only needed a draw and then obviously conceded another chasing it at the end.

“The story that went unnoticed was Jordan [Henderson] was unavailable for three of the last four games because of a last minute sending off against City.

“He was a huge miss for us that day. But as time goes on and you see the images and you realise how well we played that season so I don’t lose sleep about it.”