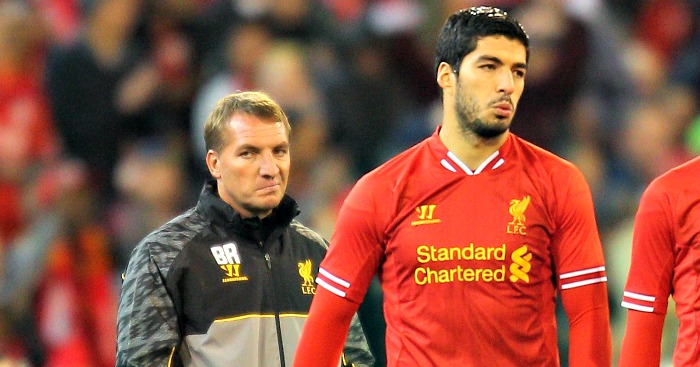 The striker was a frustrated figure under former boss Claude Puel, admitting his tactics did not suit him.

The former England forward was also dropped by Puel on occasion, leading to a strained relationship, with Vardy apparently aiming a blast at the Frenchman when he was talking to Paul Pogba after a defeat to Manchester United.

But ahead of Sunday’s trip to Watford, the wonderful Rodgers is ready to put Vardy at the top of the Foxes’ tree again.

“He is so natural at scoring,” Rodgers said. “When I see the team we need to get players closer to him.

“The team has come deeper, the ball goes up to him and he’s fighting on his own.

“Because of the title win and everything around the threat of Jamie, space is no longer there all the time, especially at home. So when teams are banked up you have to find a way and a method that still exploits his qualities.

“It was something I spoke to him about at length on Friday morning before training, where we could get him into areas and how we were going to play against teams that just sit deep.”

Rodgers, who joined from Celtic on a three-and-a-half year deal on Tuesday, believes he will help develop nine-goal Vardy.

“I will certainly give him other ideas and just simplify the game,” he said.

“But you saw the other night (against Brighton) what he is – pass, makes the run and gets his finish.

“Away at Chelsea he comes in, (James) Maddison plays the pass, he makes a little blindside run and finishes.

“The problem is sometimes the gaps are a little bit too big and it’s just one long ball and he’s fighting for it.”

Luis Suarez scored 31 goals when Liverpool finished second in the Premier League under Rodgers in 2014, with the Northern Irishman keen to utilise Vardy in a similar way.

“You’ve got one of the best strikers who can press the game at the top end of the field so that’s where it starts,” he said.

“When I was at Liverpool it was Luis, he started the press so that’s where it begins. If you look at Manchester City, Tottenham and Liverpool, you’re not doing it for 90 minutes.

“Other times you’re just in and setting up the press to go and exploit the spaces.