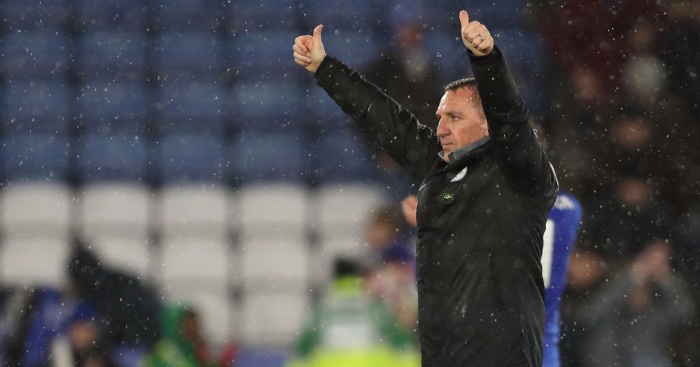 Brendan Rodgers insists Leicester were well worth their 4-0 victory over Aston Villa, and hailed the performances of Jonny Evans and Harvey Barnes.

Pepe Reina wandered out of his goal in an attempt to cut out a through ball to allow Harvey Barnes to score Leicester’s first.

Jamie Vardy then converted a penalty following a Tyrone Mings handball, and had a brace soon after as he swivelled brilliantly to fire past Reina.

And Barnes then scored his second of the game to round off a brilliant performance from the youngster.

Rodgers told BBC Sport: “A very, very good win, an important win. The last few games – certainly our last game – we haven’t been at our level. In terms of attacking, we were much better this evening. After the first goal we went on and played very well.

“We want to win and early on you could see our confidence wasn’t where it has been. The only way you regain that confidence is hard work and these players have been brilliant. Tonight the intensity was there and we didn’t give away too much – Jonny Evans was incredible and it’s another clean sheet for us.”

“He’s [Barnes] got a very bright future, he’s been getting better, his intensity and hunger to get in and score is what we’ve spoken about and now he gets in there regularly and he’s getting goals. I’m delighted for him and Jamie [Vardy] who got two as well.

“We want to look forward, for us we don’t get too counter productive and look on the negative side. We can only concentrate on ourselves. We have a great spirit and great honesty.”