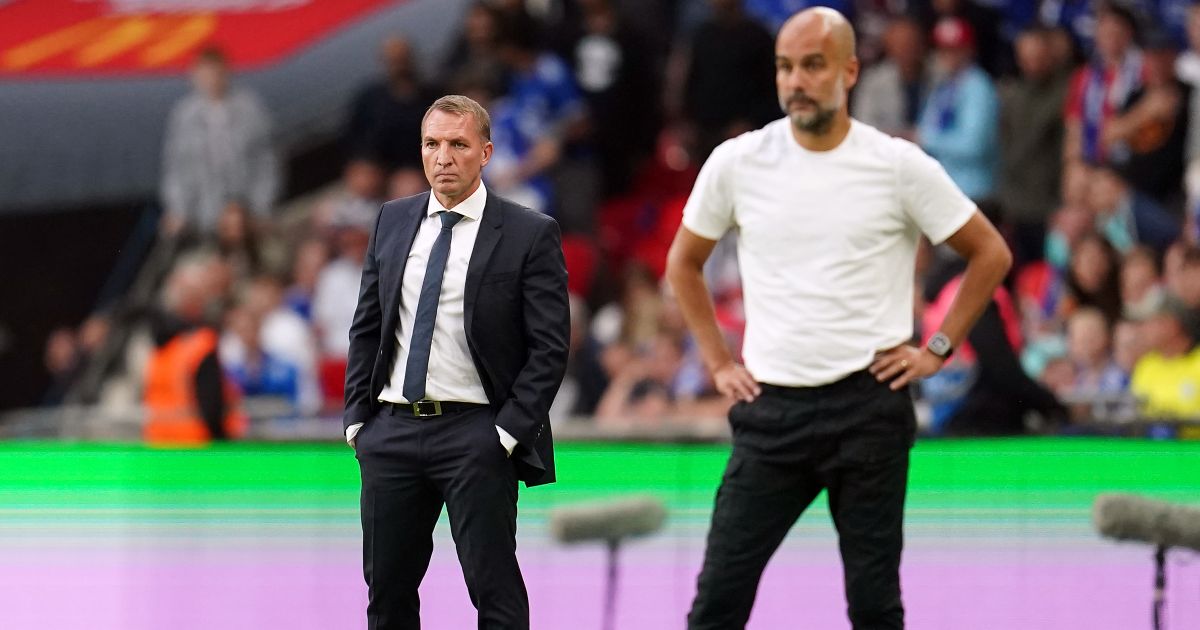 Leicester boss Brendan Rodgers has hailed Manchester City boss Pep Guardiola as the “world’s best manager” ahead of their clash over the weekend.

The Foxes resume their Premier League campaign against the reigning champions at the King Power Stadium on Saturday.

After defeat at Tottenham on the opening weekend of the season, City have responded with back-to-back 5-0 wins against Norwich and Arsenal.

Time for England and Southgate to follow Guardiola’s approach…

Rodgers has a good recent record against Guardiola after a 5-2 win at the Etihad Stadium last season and victory against albeit a much-changed City team in the Community Shield in August.

The Northern Irishman is looking forward to going head-to-head once more with the manager he considers the best and he has been singing the praises of the former Bayern Munich and Barcelona boss, who has won 30 major titles during his managerial career.

“Pep’s an incredible coach, a pioneer for the modern game,” said Rodgers.

“It’s about numbers, creating overloads, but principally looking to have the ball as much as they can. He’s always had little slants about where the full-backs are.

“Manchester City are a team of talented players with a talented coach who can maximise what he gets out of those players.

“They’re an incredible team. They have the world’s best manager, so it’s always a huge challenge. Their squad play the best positional game.

“They have the technique and hunger, and that’s why they’ve been so successful. You know you are going to be restricted on the ball, but when you have it, it’s having that confidence. You have to be concentrated.

“They have special talents who can make the difference. You need to defend well, play well, get a bit of luck, and take the opportunities. We will look to be competitive.”

Leicester’s 5-2 win came at almost the same stage of the season last season. Asked if it is better to catch City early on in the campaign, Rodgers said: “You go into every game and hope you can play well. You have to play well to get a result.

“They’ve been finding their rhythm, their touch, their connection. Lots of things need to go well for you.

“We’re at home, we’re looking forward to being back together again. It’s important you stay in the game against a team like Manchester City.”

The Foxes will have Ricardo Pereira and Ryan Bertrand available against City. Pereira came off with a hamstring injury in the win at Norwich prior to the international break but he is fit, as is fellow full-back Bertrand following his positive test for Covid-19 last month.

Central defenders Jonny Evans (foot) and Jannik Vestergaard (knock) are “progressing well” in their recoveries but Saturday’s game may come too soon for them to be involved.

Ayoze Perez is still suspended after his red card in the defeat at West Ham, while deadline-day signing Ademola Lookman could be included in the squad.