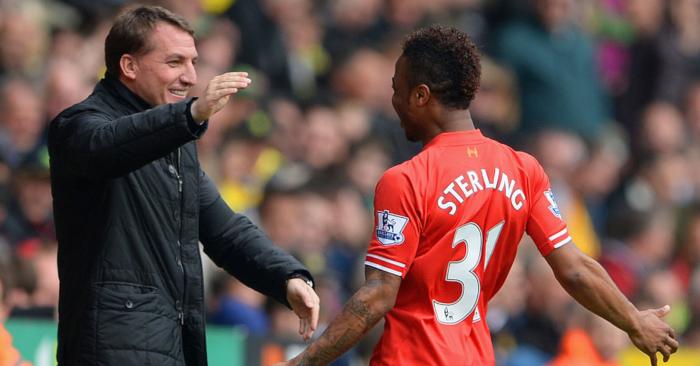 Brendan Rodgers insists Raheem Sterling’s move to Manchester City to Liverpool was not motivated by money.

The England star created huge headlines in 2015 when making a controversial £49million switch from Merseyside to Manchester, a then record fee for an English player.

Sterling, just 20 at the time, was really starting to blossom under the tutelage of Rodgers and had been a key figure alongside Luis Suarez, Daniel Sturridge and Steven Gerrard as Liverpool went so close to title glory in 2014.

When the Merseysiders lost Suarez to Barcelona after the 2014 World Cup, Liverpool fans believed Sterling’s emergence could help fill the gap but the Jamaican-born star, who made his Reds debut under Rodgers at the age of 17, decided to move on too.

The decision outraged the home support and Sterling was blasted for being greedy, a chant they still strike up when he returns to Anfield in City colours.

But Rodgers has a different take, believing the move was down to footballing reasons.

“For Raheem, it was never about money,’ Rodgers told the Liverpool Echo.

“If it was about money, he could have stayed at Liverpool. It was about being the best he can be.

“In that moment in time, there was an opportunity to go to where they had top-class players. He’s gone in there and developed and become a winner, which is clear to see now in his game.

“I look at Pep (Guardiola)’s team and it’s not the same if he’s not in it. What a testament that is to a young English player.

“What I loved about Raheem was that, for a young boy, he knew what he wanted to be.”

Sterling was an inconsistent finisher at Liverpool, managing just 23 goals in 129 appearances.

But for City, he’s thrived in front of goal, bagging 25 goals last season and scoring 23 so far this term before the season was halted for the Coronavirus outbreak.

Despite the hostile reception he receives when playing at Anfield with City, Sterling says he wouldn’t rule out a return to Liverpool one day.

“Would I ever go back to Liverpool? To be honest with you I love Liverpool,” he said in a recent Q&A session on Instagram.

“Don’t get it twisted, they are always in my heart. It’s a team that did a lot for me growing up so…”