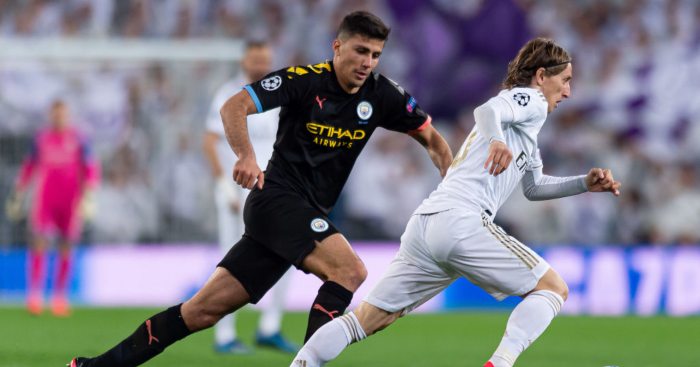 Premier League champions City produced a stunning performance to come from behind and beat the Spanish giants 2-1 in the first leg of their Champions League last-16 tie.

Real had led through a 60th-minute Isco strike but City were dominant throughout the second half and claimed a deserved and famous victory with Gabriel Jesus and Kevin De Bruyne goals in the final 12 minutes.

OPINION: Man City overcome themselves thanks to Guardiola brilliance

The hosts’ woes were compounded when Sergio Ramos was sent off in the closing stages and Rodri thinks City would have won even more convincingly had the game gone on longer.

The Spain international said: “They dropped off physically in the last 10 to 15 minutes and we made the most of that.

“If the game had lasted a little longer we could have done more damage still, but given the way the game was, it is a very good result for us.”

The sides will meet again in the second leg at the Etihad Stadium in two weeks’ time. Real may not be as formidable as in the days of Cristiano Ronaldo but Rodri has warned City against complacency.

Rodri said: “It is a good result but it’s not done at all, knowing the opponent we have before us. We will approach the game with the greatest seriousness and I am sure they will battle.

“Of course you can tell (when someone like Ronaldo is not there). Those kind of players, of which there are basically two in the world, who tip the balance, you notice when they’re not there. They’re a bit flatter.

“But that doesn’t mean they’re worse. They have good midfielders and they impose on you more. They’re still a very hard team. Everyone knows what Madrid are like, what they’re capable of.”

The game turned when De Bruyne crossed for Jesus, who gave a committed performance on the left wing, to head home a 78th-minute equaliser.

De Bruyne then secured victory from the penalty spot after a foul on Raheem Sterling, who along with Sergio Aguero had unexpectedly been on the bench.

Real complained long and hard after the game that Jesus fouled Ramos in the build-up to his goal and it should not have stood.

Forward Vinicius Junior said: “Everyone knows it is a foul. He (the referee) has a VAR but he didn’t look at it. They always blow (the whistle) against us. It’s the same every game, always. It was a foul, definitely.”

“Gabriel puts just enough weight on Sergio that he can’t get there,” said the 56-year-old. “Sergio protested. That’s quite significant but the VAR and the referee saw it differently.”

Jesus denied he had been in the wrong.

The Brazilian said: “It’s not a foul. Football is a contact sport, I barely put my hands on him. The referee didn’t rule it out because I didn’t push him.”

He said: “I know Gabriel Jesus, he is very strong in the area and I don’t have the feeling that he pushed. It seems like he used his body a bit and he is clever.

“The penalty seemed very clear to me and Ramos was the last man so that’s a red card. The ref was good.”