Home All The News Confused Rodri reacts to City loss: ‘Lucky’ Leicester ‘did nothing’ 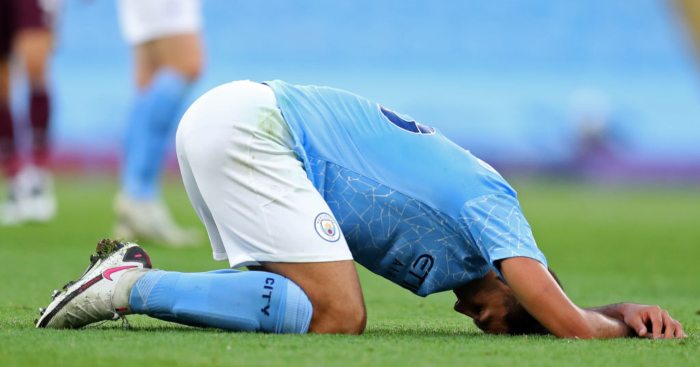 Rodri thought Leicester City were “lucky” after Jamie Vardy hit a hat-trick in their 5-2 victory over Manchester City on Sunday.

Riyad Mahrez gave City an early lead with a brilliant strike against his former club at the Etihad Stadium but Leicester turned the game around in dramatic style.

Vardy struck twice from the penalty spot, either side of a neat flicked finish before James Maddison scored a stunning fourth.

Nathan Ake pulled one back late on after Liam Delap hit the crossbar but Leicester were rampant and claimed a fifth with another penalty from Youri Tielemans.

It was a third successive win for the Foxes and condemned City boss Pep Guardiola to the heaviest defeat of his career in terms of goals conceded.

However, City midfielder Rodri thought the defeat was unfair with the Foxes playing “with 11 guys behind the ball”.

“For me, they were lucky,” Rodri told the BBC.

“Football has not been fair to us. Maybe it is our fault, maybe it is their strength – but it is very difficult to explain.

“We did a lot of good things to win the game. A team like Leicester comes here and plays with 11 guys behind the ball.

“I am young and try to learn every game, but games like this – where the opposition do nothing – you are a bit confused. It’s not the way I like to play.”