Home All The News Rodriguez could be fit for Sunday, says Ancelotti 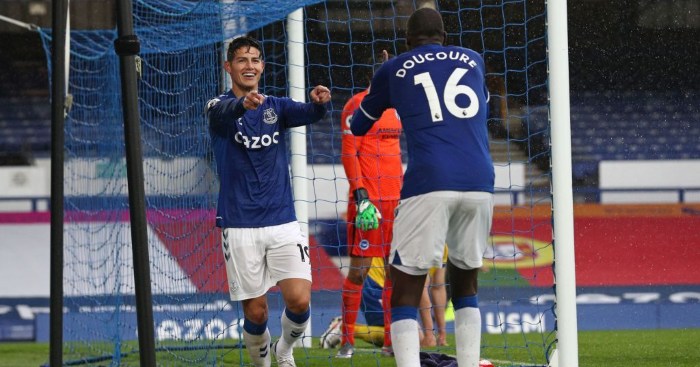 Everton star James Rodriguez may be available for Sunday’s game against Southampton, according to Carlo Ancelotti.

The former Real Madrid man was one of Everton’s marquee signings during the summer. Along with Allan and Abdoulaye Doucoure, the Columbian has immediately hit the ground running on Merseyside.

Ancelotti’s side have made a fantastic start to the new season, as they currently sit top of the Premier League after five games.

Rodriguez has been one of the best players in the division in the opening few games. He has been involved in six goals from his five league outings so far.

Everton drew 2-2 with Liverpool last time out. Rodriguez has suffered from bruising since that game after he collided with Virgil Van Dijk early on.

It was believed that this knock would keep him out of this weekend’s game against Southampton. But Ancelotti has cast doubt on this, suggesting that he has recovered well since picking up the injury.

The Italian told Sky Sports that if the player can train on Saturday, he will be well in contention to play against Southampton:

“James is not definitely out. He had a big haematoma and was not able to train until today. He is much better now and we have confidence that maybe he can play.

“Fortunately, I think his recovery was really good and he trained today – he had a partial training session.

“I hope he is going to train tomorrow and we will see if he is in condition to play on Sunday.”