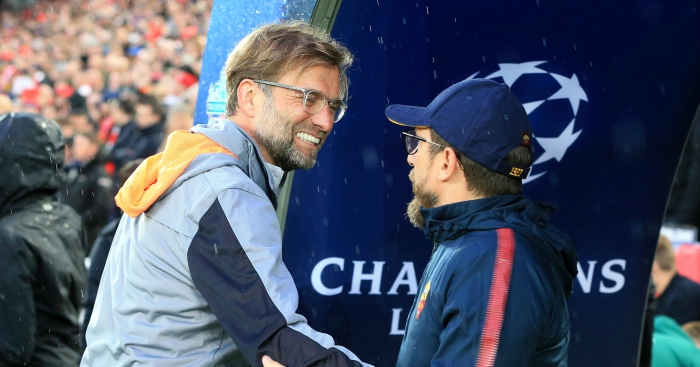 Eusebio Di Francesco has defended the tactics Roma deployed against Liverpool on Tuesday.

Roma were torn asunder by a rampant Liverpool in the first leg of their Champions League semi-final.

The Reds raced into a 5-0 lead before Roma clawed back two late away goals to give themselves a slight chance in the second leg.

Di Francesco has been criticised in the media for his approach, not least by Rio Ferdinand.

“I think the Roma manager has to take full responsibility for the result tonight,” he told BT Sport. “It’s not often you sit here and say a manager is at fault completely for a team’s performance.

“I think today he let his players down, the way he set them up. He set them up almost certainly to lose this game, the way they played – a high line at the back against a team that play quick football.

“I question whether he’s even seen Liverpool play this season, the way he set them up.”

But Di Francesco offered a staunch defence of his tactics after the game.

“We had that system in the first 20 minutes, when it was very even, so that wasn’t the issue,” he said. “We continued to lose every one-on-one situation and give the ball away very cheaply.

“I don’t want to see anyone on trial now, as preparing games on paper is not the same thing and tactics become relative if we can’t keep the ball or make a simple pass.

“Their attacking moves almost all happened when we lost the ball. If they allowed us some three against three moves, it means we have the quality. Our centre-backs were caught when they should’ve turned and blocked. Losing all these duels showed we were a little below Liverpool in terms of physicality and pace.”

Roma sporting director Monchi suggested that the Italians still have a chance heading into the second leg.

“We were dead, but now we have a little bit of life and must use that the way we did against Barcelona,” he said.

“We must have faith and believe. I think the fans will be behind us, 90 minutes at the Olimpico for a side like Liverpool will be very difficult.”