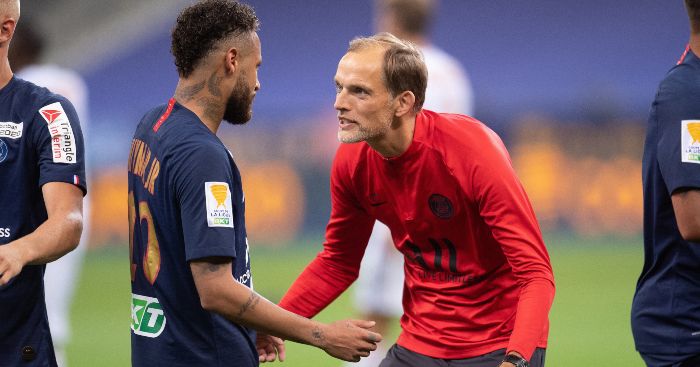 Chelsea will appoint Thomas Tuchel as Frank Lampard’s successor after they officially announced his sacking on Monday, according to reports.

The Blues – who beat Luton Town 3-1 on Sunday – have lost five of their last eight Premier League matches, leaving Lampard out of a job.

Chelsea confirmed Lampard’s sacking in a statement on Monday morning.

MEDIAWATCH: Lampard sacked? But you said he was safe…

And now the questions turn to who will replace the Chelsea legend at Stamford Bridge with the likes of Brendan Rodgers, Ralf Rangnick and Max Allegri all linked.

Raphael Honigstein in The Athletic claims that Chelsea ‘will replace Frank Lampard with Thomas Tuchel‘ with Roman Abramovich ‘thought to have been keen to bring Tuchel to Stamford Bridge’.

Tuchel has already been heavily linked with the Chelsea job since his sacking at Paris Saint-Germain, with German publication Bild claiming back in December that German boss was keen on a ‘new challenge’ in England.

It was said at the time that Tuchel ‘would like to work with’ Kai Havertz, Timo Werner and Antonio Rudiger, who all play for the German national team.

Some Chelsea fans showed Lampard support during their victory over Luton Town on Sunday by unveiling a Stamford Bridge banner in support of the club legend.

Speaking after the match, Lampard said: “I knew about the banner maybe a week or two ago, directly from those who put it together, who are obviously massive supporters of this club; and I was very appreciative.

“I don’t know if emotional was the word, but people who know about how I feel about this club will understand, it’s a two-way thing from the first time I came here, maybe 20 years ago nearly.

“So I’m very thankful for that support, and it’s great to see it at the Bridge. I feel it very strongly indeed.

“I know the modern world has moved on with social media there are eyes all over the world.

“But one thing I know is that when I’m at the Bridge, the fans have shown me huge support as a player, and now as manager here as well. So I appreciate it very much.

“All I want to do is repay that with being successful at the club and working through a tough moment to bring a long-term success to the club.

“I keep saying recently there will be moments of pain, and moments that are difficult, because of the situation.

“And when you see the fans that are there to stick with you from now, and going forward, that’s an important thing for me.”