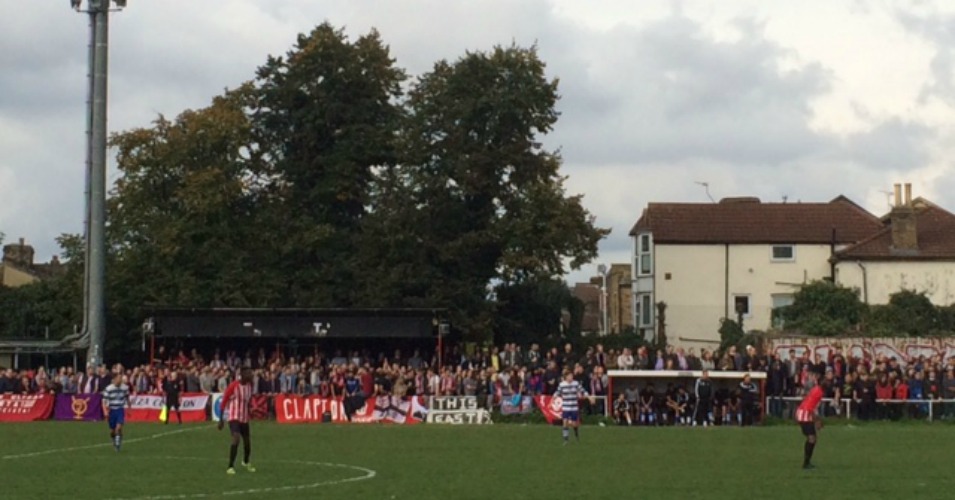 It’s a club with a story and a set of devoted Ultras. One visitor fell in love…

As Non-League Day once again attracted thousands of football fans across the country to support the grassroots game while the upper echelons of the footballing world enjoyed an international break, I became a Clapton convert.

The attraction of non-league football was no more evident than in the heart of east London, where two sides from the ninth level of the English football pyramid – four levels below the Vanarama National League – attracted a record crowd led by devoted Ultras, blazing flares and both teams joining fans for a singalong at the final whistle.

The Old Spotted Dog Ground, situated between West Ham’s current home at Upton Park and future home at the Olympic Stadium in Stratford, welcomed 761 fans to the Essex Senior League clash between Clapton and Ilford, recording a new record attendance for the division. To put this in context, matches in the Essex Senior League typically attract crowds of up to 30 hardy souls, but more people watched this clash than saw Conference side Boreham Wood beat Welling United 2-0 (543) on Saturday, or Guiseley lose 3-0 at home to Macclesfield last Tuesday (653).

Moving to neighbouring Stratford on Friday has sparked my own burgeoning love affair with Clapton. I knew that Saturday was Non-League Day, so used their website and location tool to find the non-league match closest to my new home and stumbled across Clapton FC. Researching the club, it soon emerged that this is a fantastic club with not only amazing supporters, but also an incredible story.

How about this for starters? Clapton FC are widely acknowledged to have given a debut to England’s first black professional footballer, Walter Tully, back in 1908. It was also the club of Benjamin Odeje, the first black footballer to represent England at any level. Clapton were also the first English team to play football outside the UK when they travelled to Antwerp and beat a Belgium XI 8-1 in 1890.

These special moments have remained integral to the modern-day Clapton FC. The Clapton Ultras – or Scaffold Brigada – supporters section was formed in 2012. It is run by fans who are fed up with professional football, opposed to discrimination and far-right politics, and support migrants and refugees. Indeed, on Saturday they offered Solidarity Tickets, which saw them cover ticket costs for pensioners, people who are unemployed/on benefits, refugees and asylum seekers.

One female fan amongst the Ultras told me: “This is a club with a great history, we’re the first to have a black player and we’re all about making a stand against racism, fascism and homophobia. It’s great to see so many people here today supporting this, but what’s interesting today is that there’s so many men here watching, it’s usually about 60/40 in terms of men to women here.”

The fanatical support of these fans has seen Clapton’s attendances skyrocket from an average attendance of 43 in 2012/13 to double that figure the next season, and then saw a crowd of 519 against Stansted in April, which had been a record attendance for the Essex Senior League… until Saturday.

Walking into the Spotted Dog at around 1.30pm I was at first a little underwhelmed; the ground was empty and the players were just arriving to inspect the exceptionally bumpy-looking pitch. Moving on to the bar in search of locals did little to raise spirits, but that changed as I returned to the stadium at 2.30pm. A huge queue of people snaked around the block to pile through the single turnstile, and the Ultras had set up a stall parallel to the queue to sell scarves and collateral. I began to get the sense that something special was happening here.

Walking into the ground, which comprises two tiny stands on opposite sides of the pitch, there was a mass of Clapton fans building around the Ultras’ stand, The Scaffold, which was now adorned with flags and banners. As the players emerged for kick-off, the fans, led by the Ultras, burst into song and didn’t stop singing throughout the 90 minutes and beyond, with chants like “if you’re not singing, you’re not Clapton”, the apt “you’ve got more goals than fans” with the scoreline at 3-1 to Ilford, and the rather topical “f**k off Sky Sports, we all love non-league”. They showed a superb level of support that I’ve rarely seen at a professional football match, let alone a clash in the ninth level of the footballing pyramid, which included setting off flares after Clapton’s second-half goals.

At the final whistle came something I have never seen at a football match at any level. Both sets of players walked over to the stand in front of the Ultras, and the Clapton players led a rendition of one of the the Ultras’ songs. They then walked all the way along the touchline to shake every supporter’s hand and thank them for cheering on the team.

On the pitch the entertainment matched the commitment from the supporters, as Clapton and Ilford played out an enthralling 3-3 draw. Clapton took the lead early on with a classic non-league goal, as left winger Miles Hunter cut inside and hit a low 25-yard shot which hit a mound in the pitch and flew over the keeper and into the top corner.

Ilford fought back in style, but not before a fracas following a foul on an Ilford player right in front of the Ultras appeared to end in the visitors’ captain striking the referee, but only resulted in a yellow card. The visitors equalised after 20 minutes with another typical non-league goal, as the hosts’ Senegalese goalkeeper Pape Diagne spilt a tame shot straight to forward Luke Thomas for a tap-in.

Five minutes before half-time, the visitors had the lead as Chris Stevens slammed home following a messy corner, then raced into the crowd behind the goal to celebrate with all four Ilford fans. On the verge of half-time Ilford doubled their lead as captain Chris Lockwood shrugged off his earlier altercation with the referee and smashed home a penalty.

Clapton could have been forgiven for letting their heads drop but they were soon back into it before the break as Freddie Morris headed home a long throw into the box from the right. The hosts pushed for an equaliser in the second half and it looked as though they were going to miss out, but the long-throw recipe again proved fruitful as lanky forward Roddy Lemba levelled the scores with ten minutes remaining. While the quality of football was far from brilliant, both teams worked hard and crashed forward in search of victory, especially Clapton in the last ten minutes, spurred on by the tremendous support from The Scaffold.

Speaking after the match, Ilford manager Allan Fenn, a former Clapton player, told me: “It’s fantastic to have all these fans here to watch and support non-league football and this was a superb advertisement for the Essex Senior League, but from our perspective it’s a shame that we threw away the lead and have to settle for 3-3.

“Clapton has a great allegiance for a great cause and it’s great to see, I just wish they’d been like this when I was here.”

It was incredible to have been a small part of this footballing experience, and to have seen the love fans can cherish for a non-league club. Moments like this help you realise that real football is truly alive and kicking, away from the faux reality of often-average players being paid thousands of pounds a week. I would encourage every football fan – disillusioned or not – to explore their local club. Though I should warn you – not every club is like Clapton. I’ll be back.